COVID-19 information: latest updates and reopenings.
Home / All the latest news from Normandy / Ten films you may not know were shot in Normandy

France enjoys a rich filmmaking tradition dating back to the golden age of cinema, with countless films shot in Paris and on the French Riviera. However, you may not know that Normandy has also seen its fair share of filming over the years! Here are ten films shot in our region that are well worth a watch…

Let’s kick things off with a classic! Few who have watched Steven Spielberg’s epic blockbuster Saving Private Ryan can forget that famous opening scene where the film’s eponymous character walks through the Normandy American Cemetery, accompanied by his family and John Williams’ powerful score. Visitors to the cemetery, which overlooks Omaha Beach where the on-screen conflict really happened, may even know that while Captain Miller’s grave does not exist, his character was based on Frederick ‘Fritz’ Niland, an actual soldier who fought in D-Day, who is buried there and whose gravestone you can visit.

Arguably one of the most influential French films on Hollywood, Jacques Demy’s all-sung romantic musical Les Parapluies de Cherbourg made international stars of both leading lady Catherine Deneuve and composer Michel Legrand (perhaps better known by an English speakers as the man behind ‘The windmills of your mind’ from The Thomas Crowne Affair). This iconic film put the coastal town of Cherbourg on the map, winning three awards at the 1964 Cannes Film Festival, including the prestigious Palme d’Or. As a result, Cherbourg really does have its own umbrella company now, Le Parapluie de Cherbourg, which was founded in 1986 and is open to the public. Visitors to Cherbourg can also take a self-led walking tour of the town to see where the film was shot.

Our wild card in this list, quasi-autobiographical comedy Comment c’est loin was written and co-directed by French rapper OrelSan, stars him and fellow rapper Gringe, and is based on their 2013 album Orelsan et Gringe sont les Casseurs Flowters. The film is set over a 24-hour period and follows Aurélien and Guillaume as they struggle to finish recording their first song together, preferring instead to hang out with mates and have a good time. The film was shot in OrelSan’s home town of Caen, and while it is little known outside France, can be found on Amazon and enjoyed by anyone up for challenging their knowledge of French slang!

You can’t talk about films shot in Normandy without mentioning The Longest Day! With its all-star cast (big names included John Wayne, Richard Burton, Henry Fonda and Sean Connery), the film employed cast members and military consultants who had actually seen action on D-Day. Key scenes were filmed at Pegasus Bridge, the Pointe du Hoc, Port-en-Bessin, the Longues-sur-Mer battery and perhaps most memorably, Sainte-Mère-Eglise where Private John Steele famously landed on the town’s church tower and hung there by his parachute for hours before being taken captive by the Germans.

Director Luc Besson returns to his French roots with this cinematic tribute to the Maid of Orléans, which you may know for its brutal battle scenes and leading lady Milla Jovovich (of Fifth Element fame). What you may not know is that the scenes of Charles VII’s coronation in Reims were actually filmed in the small town of Sées in southern Normandy, and that the interior and exterior shots of the cathedral taking centre stage are in fact of our very own Sées Cathedral. Another interesting fact is that many of the people who feature in these scenes are not actors, but residents of the local area who were brought in as extras!

Also directed by Luc Besson and executive produced by no other than Martin Scorsese, comedy The Family follows a New York mafia boss (Robert de Niro), his wife (Michelle Pfeifer) and their children, who are relocated to a village in Normandy under the witness protection programme after snitching on the mob. Filming took place in the towns of Gacé, Le Sap and L’Aigle in an area of Normandy known as the Pays d’Ouche, and you can see the distinctive half-timbered buildings typical of this area throughout the film.

Finland’s most famous director Aki Kaurismäki selected Normandy as the setting for his topical immigration-themed film Le Havre. A touching account of how an aging shoe shiner takes in an African boy who has arrived illegally by cargo ship, much of the film is shot (unsurprisingly) around the city and port of Le Havre. Thanks to its sensitive balance of serious themes and lighter moments and its timeless cinematography, Le Havre won several awards at the Cannes, Munich and Chicago film festivals when it came out in 2011. FYI – if you live in the UK, you can rent it on Amazon Prime.

Comedy drama Un singe en hiver follows former French marine and alcoholic Albert Quentin (Jean Gabin), who runs a hotel in the small seaside town of Tigreville in Normandy. When in 1944 there is a huge air raid, Albert promises his wife he’ll give up alcohol if their hotel survives. It does, and 15 uneventful years of sobriety go by before hotel guest Gabriel Fouquet (Jean Paul Belmondo) checks in and turns Albert’s life completely upside down. Villerville, between Trouville-sur-Mer and Honfleur on Normandy’s Flowered Coast, forms the backdrop for this film, with numerous street scenes shot amid the town’s half-timbered houses and villas, and at the Cabaret Normand, which exists to this day.

Winner of the Palme d’Or at Cannes, two Golden Globes and two Academy Awards, Claude Lelouch’s Un homme et une femme follows recently widowed single parents Anne and Jean-Louis (Anouk Aimée and Jean-Louis Trintignant), who meet at the Deauville boarding school their children both attend after Anne misses her train back to Paris. Jean-Louis offers her a lift and the rest, as they say, is history. Famous for its lush cinematography, instantly-recognisable ‘chabadabada’ theme tune by François Lai, and its combined use of colour, monochrome and sepia, the film was largely shot in the glamourous seaside resort of Deauville, with notable scenes on the famous boardwalk and beach, and at the Hôtel Barrière Le Normandy, which then went on to name one of its most luxurious suites after the film.

Michel Carné’s proto-noir classic Le Quai des Brumes (Port of Shadows) tells the story of French army deserter Jean (Jean Gabin), who arrives in Le Havre hoping to board a ship to Venezuela. He soon gets distracted in the fog-swept port city and falls in love with local beauty Nelly (Michèle Morgan), hoping to whisk her away with him, but it quickly becomes clear that this will be no easy task! This dark and brooding portayal of Normandy’s largest city in the 1930s is perhaps what French people and film buffs still think of if they have never been there, but we can assure you that our lovely Le Havre is very different now! 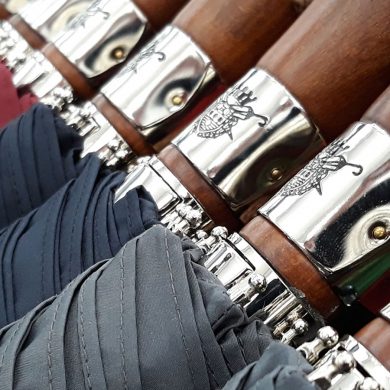 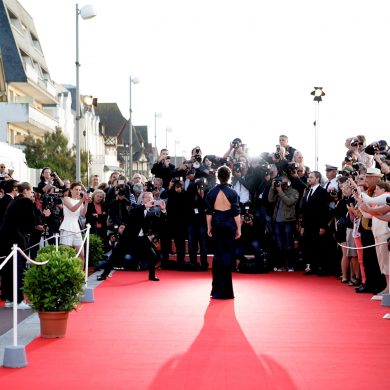