Arguably the biggest French film festival after Cannes, the Deauville American Film Festival takes place every year in the glamorous seaside resort of Deauville and celebrates all the biggest and best movies from the US. The festival premieres over 100 films every year, from burgeoning independent producers to acclaimed Hollywood directors. Described as a ‘cinephile’s paradise’, Deauville will host its 48th festival in September 2022 and will once again welcome the crème de la crème of Hollywood actors and celebrities from all over the world.

Cinema has been intrinsically linked to the picturesque seaside resort of Deauville, ever since the release of the French film ‘A man and a woman’, written and directed by Claude Lelouch in 1966. Extremely popular at the French box office, this film put Deauville in the international spotlight especially thanks to the love scene shot in the Hotel Barrière Le Normandy. It also led to the creation of the Deauville American Film Festival. Since then, every American movie star and celebrity to visit Deauville has become a part of the town’s identity, with the many Art Deco changing cabins lining Deauville’s famous boardwalk each bearing a Hollywood star’s name.

Nothing compares to the glamour of Deauville during the festival. From A-list parties to red-carpet premieres, the Deauville American Film Festival is THE place to see all of the biggest actors, actresses, directors and producers hailing from the US and elsewhere. While not everyone attending the festival is out to spot celebrities, who could help getting excited after seeing a character from their favourite film in the flesh? In 2019, the festival welcomed Johnny Depp, Pierce Brosnan, Kristen Stewart, Geena Davis and many other big names. Stars expected to walk the red carpet this year will be announced soon.

The Deauville American Film Festival is the only festival in the world to offer film screenings 24 hours a day over ten days. These screenings are held at several venues in Deauville, including the Centre International de Deauville (CID), the Cinéma du Casino and the Cinéma Morny Club. There are four different categories: ‘Competition’ screenings present new talent, ‘Premiere’ screenings are followed by Q&As with the writers and directors, ‘Uncle Sam’s Docs’ are documentaries that provide an insight into American society, and ‘American Nights’ screenings revisit all-time American classics.

One advantage to going to the Deauville American Film Festival is that during your stay, you can also visit some of the most stunning and historical towns nearby. Enjoy a superb selection of American films in Deauville, then head off to explore the neighbouring town of Trouville-sur-Mer, which hosts its very own short film festival ‘Off-Courts‘ over the same week, the pretty port town of Honfleur along the coast, or the seaside town of Cabourg, which hosts a Romantic Film Festival every year in June. 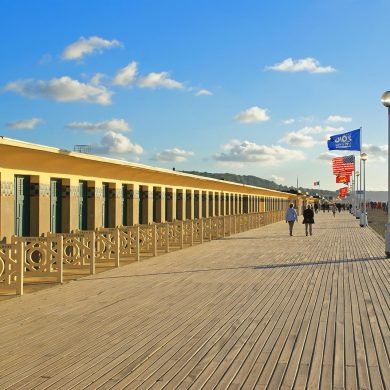 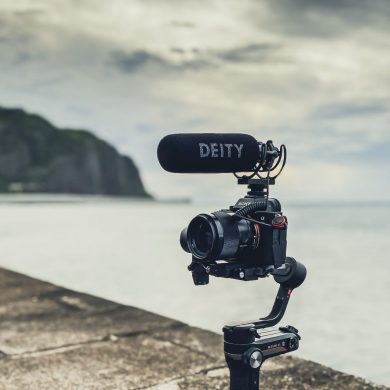 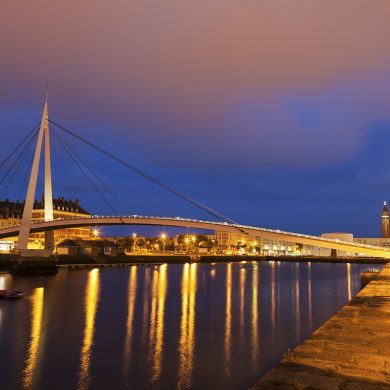 The Seine estuary, from Le Havre to Deauville