COVID-19 information: latest updates and reopenings.
Home / Plan your trip / Useful visitor information / How to get to Normandy

A two-hour train journey from Paris, with one international airport and four cross-Channel ports, Normandy is easily accessible by rail, air, ship and road, thanks to excellent transport connections.

travelling to normandy by ferry

The price comparison websites aferry.co.uk and directferries.co.uk have a search function to compare the available ferries from all operators at your chosen port between the UK and France.

From the Channel Islands and the Chausey Islands

Whether travelling on national roads, motorways or country lanes, plan your route, distances, travel time, and tolls and petrol costs on viamichelin.com

Via Eurotunnel: The Eurotunnel terminus in Coquelles is only 1h30′ from Le Tréport, one of the gateways to Normandy.

Normandy has an extensive public transport network, enabling you to have a full day out exploring the area without using the car.

Make use of the Comment j’y vais search engine to get as quickly as possible from A to B on public transport in Normandy (website available in English).

With over 310 miles (500km) of cycling routes, there’s no better way to explore the stunning scenery and rich heritage of Normandy than on a bike. The varied cycling routes offer a range of great cycling experiences to suit all ages and abilities, from traffic-free family rides to challenging hilly trails.

New for 2022: Air carrier L’Odyssey is launching a seasonal route between London City airport and the seaside resort of Deauville. The twice-weekly seasonal service will launch on July 1, with flights departing Deauville Normandie airport on Fridays and Sundays at 13:10, arriving into LCY at 13:15, before returning at 13:45 and landing back into Deauville at 15:50

Caen in all seasons 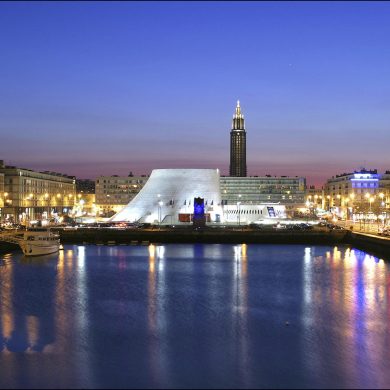 Travelling to Normandy by ferry