The outcrop of granite cliffs overlooking the port gives your approach to Cherbourg a dramatic aspect, and the great embrace of the harbour roads – they say – are equally impressive. And on either side, spectacular sandy beaches and rocky inlets that characterise the 450km of coastline on the Cotentin peninsula surround Normandy’s ‘hedgerow country’.

In 1786 the extraordinary but aborted project to create a harbour wall by towed oak caissons was attended by King Louis XVI; 1858 saw the inauguration of the new harbour by Emperor Napoleon III and Queen Victoria, and six years later the last battle of the American civil war – between the USS Kearsage and the CSS Alabama was fought out offshore in 1864. And of course on April 10th 1912 the largest ship then afloat in the world, the Titanic, left the largest “artificial” harbour in the world, on its way to the United States…

Then there was Cunard and the “‘Queens’, Le Normandie and Le France. On-shore, your passengers can find all this history and more in the Cité de la Mer with its huge nuclear submarine Le Redoutable, all part of the cruise terminal complex. It is possible to walk into town, take the “little train”, or the shuttle provided, to get a flavour of the local markets and cobbled streets of the Old Town.

Cherbourg is a naval arsenal, a fishing harbour and ferry terminal, as well as a commercial port. There are lots of tours possible out of Cherbourg, to the Cap de la Hague headland on one side or the D-Day Landing Beaches on the other. Official multilingual guides are on hand to provide commentaries.

Set in hedgerow country par excellence, the village Sainte-Mère-Eglise, the first town to be liberated on D-Day, is only 40 minutes away!

Another 40 minutes by coach and you are in Bayeux, a beautiful medieval town untouched by the Second World War.

In the port of Cherbourg, The Quai de France and the Quai de Normandie are both capable of receiving the largest cruise ships. These are secured areas, both conforming to ISPS rules, and tailor-made receptions can be organised in safety with tasting of local produce, and more as required.

Plan your trip to Cherbourg

The port of Cherbourg, a key strategic objective 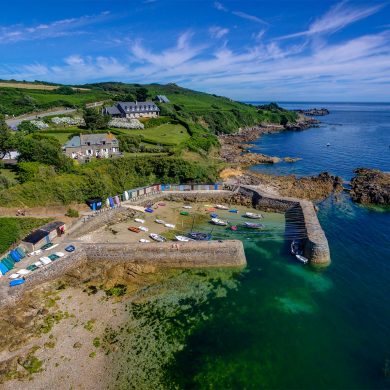 Get away from it all at the Cap de la Hague