Home/ All the latest news from Normandy/ Gustave Flaubert’s Normandy

Originally from Rouen, Gustave Flaubert is known around the world for his 1857 novel Madame Bovary. During his life, Flaubert rarely left his native Normandy, apart from occasional trips to Paris, southern Europe and the Middle East. He published only a few novels and short stories and one play in his lifetime, and it was only after his death in 1880 that he grew in influence. Flaubert’s fellow Normans were initially dismayed by his often all-too-realistic portrayals of places like Rouen, the Pays de Caux, the Pays d’Auge and the Flowered Coast. However, as literary realism grew in popularity, Flaubert’s writing style gradually resulted in his becoming the region’s most beloved literary figures, and one of France’s most famous and influential writers.

Flaubert is best known in the English-speaking world for his debut novel, Madame Bovary, where a bored Normandy housewife behaves so controversially that in 1856, Flaubert was put on trial for obscenity. A story set in a traditional Normandy village was not the most obvious subject matter for Parisian readers, but they were drawn to it in their droves.  Flaubert’s pairing of a beautiful young woman, Emma, with the respectable but unexceptional Dr Charles Bovary, results in Emma yearning for passion, excitement and wealth when village life does not quite live up to her expectations. Readers related hugely to this and the novel was a huge hit.

ROUEN: Gustave Flaubert was born in the city of Rouen in Normandy on 21 December 1821. He was educated at the Lycée Pierre-Corneille in the heart of the city, and did not leave until 1840, when he went to Paris to study law. He was born in at the Hôtel-Dieu, where his parents had an apartment and his father worked as a surgeon. The building now houses a museum, the Musée Flaubert, dedicated to Flaubert and the history of medicine. The museum is open from Tuesday to Saturday and visitors can take a Flaubert-themed tour in French, English or Italian (must be booked in advance).

Rouen Cathedral was a source of great inspiration for Flaubert. Head inside to the north aisle of the quire to see the beautiful stained-glass window of Saint Julian which inspired Flaubert’s short story, La légende de Saint-Julien l’hospitalier (The Legend of Saint Julian the Hospitalier). Also worth a look in Rouen Cathedral is a low-relief stone sculpture that inspired the scene where Salomé dances on her hands in Flaubert’s short story, Hérodias.

Visitors on a Flaubert-themed pilgrimage to Rouen can stay at the eponymous Hôtel Littéraire Gustave Flaubert just off the old market square. Alternatively, they could opt for the opulent Hôtel de Bourgtheroulde, thought to be the inspiration for the Hôtel de Boulogne, where Emma met with with her lover in Madame Bovary.

CROISSET: The Pavillon Flaubert is all that remains of the Flaubert family home in the hamlet of Croisset on the River Seine just outside Rouen. It was here that Flaubert lived for 35 years and wrote most of his stories. From 1851 to his death in 1880, Flaubert’s life and the inspiration for his work were mainly inspired by this house and his relatives in and around Croisset. The pavilion now houses a small museum with a collection of objects that belonged to the author, like writing equipment, portraits and engravings. Visitors can take a one-hour private tour in French or English (must be booked in advance). Flaubert’s collection of books is also housed nearby at the town hall in Canteleu.

RY: While Flaubert was in the Middle East and southern Europe in 1851, a local scandal took place in the village of Ry, east of Rouen, where the wife of a certain Dr Delamare had killed herself at age 27 after her husband and general ennui drove her to have affairs and get into debt. Her husband died soon after, leaving their daughter behind. A friend of Flaubert encouraged him to turn this drama into a novel and, although Flaubert later declared that Madame Bovary was pure fabrication, the similarities between this tale and the story of Emma Bovary speak for themselves.

It is commonly thought that Yonville-l’Abbaye, where the novel is set, is based on Ry. As a result, the village has become a tourist attraction in itself, with the building believed to have been the Delemare house now a Madame Bovary museum, and a Bovary Gallery exhibiting scenes from the book. You can even visit the grave of the real-life Charles Bovary, Dr Delamare, at the local church.

LYONS-LA-FORET: Ten miles south of Ry, the picturesque village of Lyons-la-Forêt with its half-timbered houses has not changed much at all since Madame Bovary was writtern, so was chosen to be where both Jean Renoir and Claude Chabrol’s adaptations of the novel were filmed. In 2013, the film Gemma Bovery, which drew many parallels with Flaubert’s novel, was also filmed in Lyons-la-Forêt.

TROUVILLE-SUR-MER: Flaubert and his family spent their summer holidays in the pretty seaside town of Trouville-sur-Mer in 1836, when he was 14. It was on the beach here that Flaubert met and became taken with an older, married woman called Elise Schlesinger, who would become the inspiration behind Madame Arnoux, the main character in his 1869 novel, L’Éducation sentimentale (An unsentimental education). It was also in Trouville-sur-Mer that Félicité spends the summer holidays with her new employers, the Aubins, and bumps into her long-lost sister Nastasie in Flaubert’s short story, Un cœur simple (A simple heart).

Visitors on a Flaubert-themed pilgrimage to Trouville-sur-Mer can stay at the Hôtel Flaubert on the seafront. There is also a statue of Flaubert next to the Barrière casino commemorating the writer’s links with the town.

PONT-L’EVEQUE: As a child, Flaubert spent many family holidays just outside Pont-l’Evêque, not far from Trouville. Un cœur simple (A simple heart), his short story of a small-town maid Félicité and her beloved parrot Loulou is set here, in the traditional cheese- and cider-producing region known as the Pays d’Auge. The colourful half-timbered buildings and flower displays around the town’s Place Jean Bureau are not thought to have changed much since the days in which Un cœur simple was written.

Visitors on a Flaubert-themed pilgrimage to Pont-l’Evêque can stay at the nearby Domaine des Geffosses, the old farmhouse where Flaubert used to stay.

CHATEAU-GAILLARD: Anyone visiting the impressive ruins of the medieval Château-Gaillard in Les Andelys would also be following in Flaubert’s footsteps. This town was where the writer’s closest school friend, Ernest Chevalier lived, and together they used to love exploring Richard the Lionheart’s castle and the surrounding countryside overlooking the River Seine.

DEAUVILLE: Trouville-sur-Mer’s chic neighbour Deauville was where Flaubert inherited a large tract of farmland from his mother, which he then went on to sell to help pay the debts of his niece’s husband. The Villa Strassburger and the Deauville-la-Touques racecourse, both popular tourist attractions in their own right, now occupy the land where the old Flaubert farm once stood.

Flaubert’s attachment to Normandy – in particular to Rouen, where he was born and did much of his writing – makes him an important figure in Normandy’s history. From April 2021 to June 2022, the region hosted a varied programme of events to celebrate the bicentenary of Flaubert’s birth, including exhibitions, shows, dramatised walking tours and other educational activities, many of which took place in the aforementioned towns that held particular importance for Flaubert. 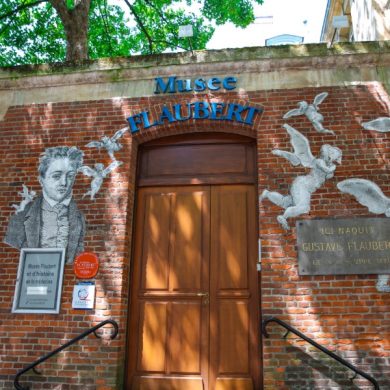 Flaubert 21: Bicentenary of the birth of Gustave Flaubert 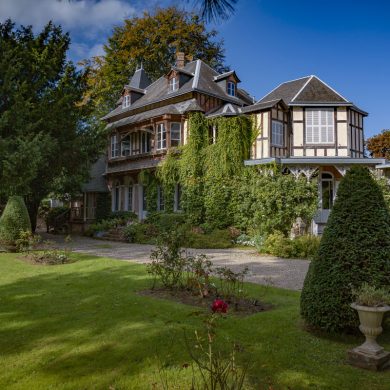 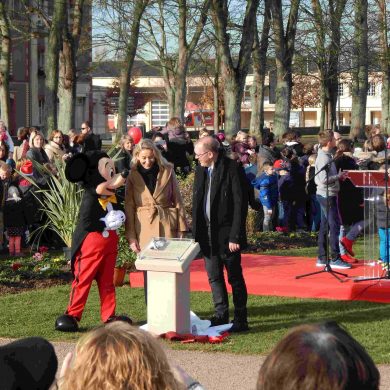 Once upon a time in a land called Normandy