COVID-19 information: latest updates and reopenings.
Home / All the latest news from Normandy / Once upon a time in a land called Normandy

Think of famous people with links to Normandy, and you’re more likely to think of William the Conqueror or even Claude Monet, not the man behind one of the most famous global brands of all time, Walt Disney. But believe it or not, Disney’s ancestors came from Normandy! Here we look into his historic ties with the region…

Welcome to Isigny-sur-Mer, a tiny seaside town that sits inconspicuously between the better-known D-Day Landing Beaches on either side of it (Utah to the west, Omaha to the east).

Isigny, if known at all to non-Normandy natives, is more commonly associated with its famous dairy, Isigny-Sainte-Mère, producer of the finest butter, cream, cheese and milk, and with delicious Dupont d’Isigny salted caramels.

What most people don’t realise is that Isigny is where it all began for the Disney family. Let’s head back in time to 1066, the year of the Norman Conquest. William the Conqueror is now both Duke of Normandy and King of England, and has opted for the latter as his primary residence, rallying around him many of the trusted soldiers who fought alongside him at the Battle of Hastings. Many of these men were awarded land and lordships for their efforts, which were more often than not named after places in Normandy.

So it was that in 1066 William gave the title ‘Lords of Isigny’ to a man called Hugues Suhard and his son Robert, who hailed from the town, in recognition of their loyalty. Hugues and Robert d’Isigny, as they were now known, accepted William’s offer of land and settled in Lincolnshire, England. Over the years, the family’s French surname ‘d’Isigny’ was anglicised, becoming ‘D’Isney’ then ‘Disney’, and the village where they settled was named Norton Disney after them. In the 17th century, a branch of the Disney family moved to Ireland, then in 1834 a certain Arundel Elias Disney immigrated from County Kilkenny to the New World with his family. This was Walt Disney’s great-grandfather, and the beginning of the Disney family’s story in North America.

Disney’s first visit to Normandy, the home of his ancestors, was in 1918. Aged 17, he was too young to fight in the Great War, so had doctored his birth certificate so he could serve as a driver in the Red Cross Ambulance Corps in France. Mercifully, the war ended not long after Disney arrived, so he was able to then visit Normandy. It was said that he was constantly sketching during his time there, and that he always looked back on that first trip with fond memories. Not long after he returned to the US, Disney opened his first studio in Kansas City, Missouri and the rest, as they say, is history.

Walt Disney Garden: Inaugurated in December 2016 by the Walt Disney Company (and Mickey Mouse himself), this garden in front of Isigny’s town hall was created to recognise Disney’s ancestors and their historic ties to the town, as well as Disney’s love for nature.

Walt d’Isigny Museum: A collection of over 600 Mickey Mouse-themed curiosities, this museum follows the story of Walt Disney’s first and most famous friend over the years, as well as that of those who drew him. There are also screenings of the very first black and white Mickey Mouse cartoon from 1928. Entry to the museum is free.

Château Monfréville: The historic home of the Suhard family, records show there has been a chateau at Monfréville since long before the Norman Conquest. The only part of the building dating back earlier than the 15th century is the east wall, which features two arched windows. The chateau has two cottages and a campsite on its grounds which can be booked online.

Behind the scenes in Monet’s famous gardens 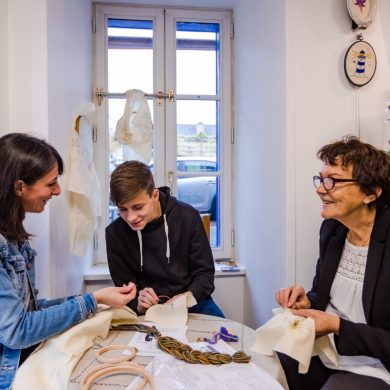