2021 marks the bicentenary year of the birth of Gustave Flaubert, one of France’s most famous and influential writers who is perhaps best-known in the English-speaking world for his debut novel, Madame Bovary. From December 2020 to December 2021, Normandy will host a varied programme of events to celebrate the bicentenary of Flaubert, including exhibitions, shows, tourist trails, dramatised walking tours and educational activities.

Gustave Flaubert was born in Rouen, Normandy’s largest city, on 21 December 1821. He was educated at the Lycée Pierre-Corneille in the heart of the city, and did not leave until 1840, when he went to Paris to study law. He made a few acquaintances there, including Victor Hugo. After leaving Paris, he returned to Croisset, on the River Seine, close to Rouen, and lived there for the rest of his life. His birthplace is now a museum, as is his house in Croisset, now named the Pavillon Flaubert, where he lived for 35 years and wrote most of his novels.

Located east of Rouen, the small village of Ry is the inspiration for the fictional village of Yonville-l’Abbaye, where Flaubert based his most famous novel, Madame Bovary. Ry will be at the heart of the celebrations, and visitors are invited to take part in a literary walk in the footsteps of Emma Bovary. The walking tour of the village starts on the Place Flaubert and takes you to the places where the characters would have lived and worked, such as the Bovarys’ house, Maître Guillaumin’s office and the Homais Pharmacy.

Ten miles south of Ry, the picturesque village of Lyons-la-Forêt was where both Jean Renoir and Claude Chabrol’s adaptations of the novel were filmed. In 2013, Gemma Bovery was also filmed there. Lyons-la-Forêt is also one of Normandy’s ‘most beautiful villages in France’ and its old half-timbered houses haven’t changed that much in 170 years!

A varied programme of events

Flaubert’s attachment to Normandy – in particular Rouen, where he was born and did much of his writing – makes him an important figure in this region’s history. From December 2020 to December 2021, Normandy will host a varied programme of events to celebrate the bicentenary of Flaubert, including exhibitions, shows, tourist trails, dramatised walking tours and educational activities. Stay tuned for further updates! 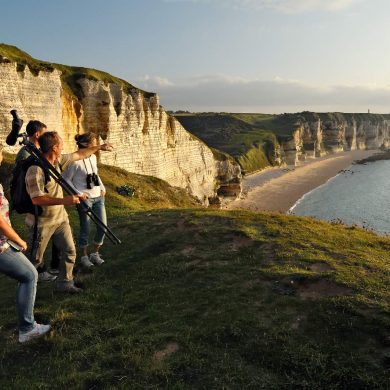 Some inspiration for your trip