Normandy’s 600km coastline offers an abundance of fresh fish and seafood, its lush green countryside provides ideal grazing for cattle and sheep, and the apple and pear orchards bear delicious fruit that is then used to make a variety of delicious drinks.

With its extensive coastline, seafood is one of Normandy’s specialties, including shellfish, clams, whelks, scallops, mussels and oysters from the Manche and Calvados départements, and scallops and herrings from Seine-Maritime.

Oysters are classified, like Normandy’s cheese and cider, with their own AOP (protected designation of origin) label. Seafood will feature on most menus, from Dieppe to Alençon, which often combine fish with the region’s other culinary specialties such as sauce à la crème or sauce au Camembert. Particular treats are Dieppe’s Marmite Dieppoise fish stew or Port en Bessin’s famous scallops (coquilles Saint-Jacques).

You can eat lobsters in Normandy too! The blue European lobster is certified as sustainable since June 2011 by the MSC (Marine Stewardship Council) and wear an identity “bracelet” (stamped with the blue MSC ecolabel). This bracelet indicates that the lobster is derived from a fishing practice that respects the environment and natural resources. It is caught in the zone which covers the vast Granville Bay up to the north of the Cotentin Peninsula, and the territorial waters of Jersey, boasting some highly reputed sectors, namely Chausey, Les Minquiers and Les Ecrehous.

Normandy’s main courses are often meat-based. Poultry is common on regional menus, including the tasty canard à la Rouennaise using local duck from the Seine valley. Other types of meat such as pork feature too, frequently cooked in cream or cider. Another local treat is salt-marsh lamb, often served in the southern part of the Manche département and given its name because the sheep are reared on the salt marshes surrounding the Mont-Saint-Michel. Further inland, you are likely to come across more traditional dishes such as chitterling sausage from Vire (andouille) or black pudding (boudin noir) from the Perche. Tripe is another Norman specialty, traditionally from Caen.

Normandy’s cheese board is one of the most impressive in France, and comprises some of the best-known French cheeses. Its most famous cheese is Camembert, which comes from the village of the same name, but you can also try Neufchâtel, Pont-l’Evêque and Livarot, which all take their name from from the villages where they were first made. Cheese in Normandy is usually served between the main course and dessert.

Whether eaten as a dessert, or as a treat with afternoon tea, many of Normandy’s sweet dishes are based on apples, such as the delicious apple tart. Another Norman specialty is its rice pudding, teurgoule, made with local dairy products and cinnamon. For those with a seriously sweet tooth, try sucres de pommes from Rouen (apple candy), caramel de pommes from Dieppe or creamy Isigny toffees.

The abundance of apples which flavour both savoury and sweet dishes also means that Normandy boasts a wide range of other apple bi-products, most notably cider, poiré (pear cider), pommeau (apple liqueur) and calvados (apple brandy).

Traditionally, Normans enjoy a shot of calvados poured over a scoop of apple sorbet, known as the trou normand (Norman hole) between some courses, a traditional way to clear the palate when eating typically-rich Norman food.

Another liqueur from the Normandy region is Bénédictine, which can be drunk as an aperitif before a meal, or afterwards as a digestive. It is also used in numerous famous cocktails around the world and is delicious mixed with grapefruit juice. 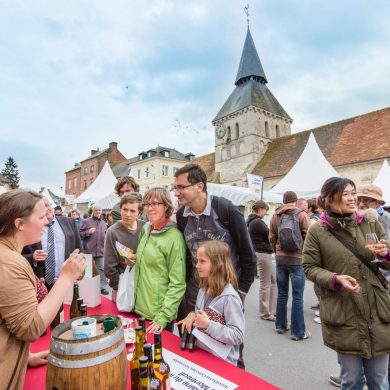 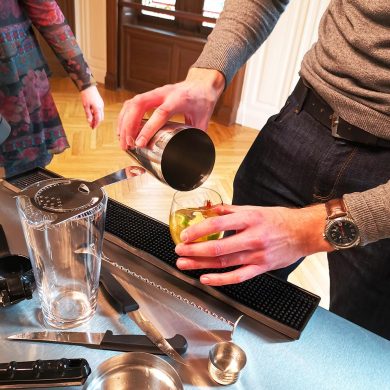 Food and markets
A 100% Norman meal