It’s a sunny afternoon, and I’m driving off the ferry in Cherbourg. Accustomed to arriving in Normandy further down the coast, being at the northern tip of the Cotentin peninsula feels exciting and unfamiliar, and I’m keen to explore the north-eastern corner of it, known as the Val de Saire. Within ten minutes I’m out of Cherbourg and heading along the scenic coastal road, with the sun shining overhead and the English Channel glistening to my left. Perfect road trip weather!

Before long, I find myself in the Val de Saire, a lesser-known Normandy utopia of green pastures, stone houses and rolling hills, bound by over 50km of rocky headland and sandy beaches. This corner of the Cotentin is rich in history, from its standing stones (thought to date back to the Bronze Age) and 17th-century coastal fortifications around Saint-Vaast-la-Hougue, to the port of Barfleur, which has gone from seeing off Norman dukes travelling to England in the Middle Ages, to receiving vital supplies for American troops following D-Day in 1944. The Val de Saire remains relatively unknown by visitors to Normandy, who all too often choose to head straight through Cherbourg and further south to supposedly sunnier climes, rather than enjoy all that the Cotentin has to offer. Given today’s weather, that seemed a great shame.

My first stop is the Phare de Gatteville. Completed in 1834, this 75m-high lighthouse is the second highest in France and is made up of 11,000 immense slabs of granite. I spend a pleasant 15 minutes learning about the various different ways that the lighthouse has functioned over the years, starting off with vegetable oil in 1835 and eventually ending up on mains electricity in 1948. My epiphany moment though is discovering that lighthouses are not there to warn nearby ships off the rocks, but to let them know exactly where they are in the sea, thanks to a light pattern that is unique to each lighthouse. Mind blown, I climb the 365 steps to the top of the lighthouse, where a magnificent 360° panorama of the surrounding coastline and English Channel await me, bursting with bright hues of blue, green and yellow. Vertigo sufferers, this isn’t for you!

On to my next stop, the port of Barfleur. As I stroll around the picturesque harbour, flanked by granite stone houses and restaurants, it soon becomes clear just why this village is officially ranked among the ‘most beautiful villages in France’. A walk up to the village’s quaint little tourist office and around St Nicholas’s church reveals beautiful views back across the bay towards Gatteville lighthouse and a blissfully peaceful beach with not a soul in sight. Hungry however, I push aside my desire to sunbathe in favour of local foodie landmark, Le Café de France. This family-run restaurant is arguably the best place to try the local specialty, Barfleur mussels, as well as the renowned oysters from nearby Saint-Vaast-la-Hougue. The reasonable prices and alluring yet compact menu are promising signs that what this restaurant does, it does well and, after deliberating over a seafood platter or mussels, I opt for the latter plus a crisp glass of dry local cider to enjoy while I waited. Not disappointed, I wolfed down the mussels when they arrived shortly after, and hastened on my way to my next stop, Saint-Vaast-la-Hougue, to catch an afternoon boat to Tatihou Island.

Upon arriving at the little port in Saint-Vaast-la-Hougue, I am greeted by no ordinary boat, but one of those amphibious vehicles that travels both on land and in the water. This is so visitors can travel to nearby Tatihou Island, a mere five minutes away, both at high and low tide. When I arrived, it was high tide, and I hop on-board just in time for the boat to roll backwards down into the sea. Once on Tatihou, I take a note of the return boat times and set off on what can only be described as an Enid Blyton-esque adventure on a treasure island, which I pretty much have all to myself. Home to a maritime museum, botanic garden and bird reserve, the island has more than enough to keep you entertained for a couple of hours, although given the glorious weather, it seemed a shame to be indoors, so I stick to the outdoor options. My history buff tendencies kick in upon reaching the eastern end of the island, where I climb the Tour de Tatihou, a defence tower built in 1694 by Vauban, architect to King Louis XIV, which became a UNESCO World Heritage Site in 2008. Its twin, the Tour de la Hougue, sits across the bay in Saint-Vaast-la-Hougue and is also UNESCO-listed.

Catching the next boat back to the mainland, I am soon back in Saint-Vaast-la-Hougue, my final stop of the day before I head back to Cherbourg. Voted France’s favourite village in 2019 and home to the delicious Saint-Vaast oyster, renowned across Normandy for its distinctive nutty taste, this lively fishing port boasts seafood restaurants all along its quays, plus the traditional grocery shop and local landmark, La Maison Gosselin. I spend a good half hour perusing classic art nouveau posters, artisanal products and local delicacies in the food section before eventually opting for some PDO-certified Cotentin cider and a large round of local camembert from Lessay.

Treats safely stashed, I drive back to Cherbourg ferry port, happy with the afternoon’s discoveries. With coastal colours rivalling those in the Med, beautiful villages to visit and ample activities on offer, there are more reasons than ever to veer east from Cherbourg and explore the Val de Saire this summer! 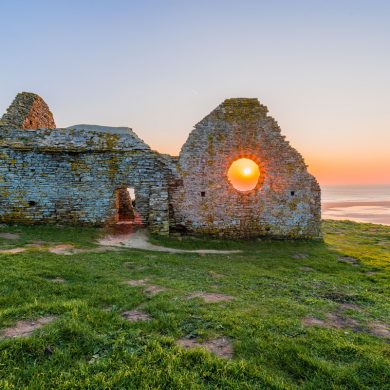