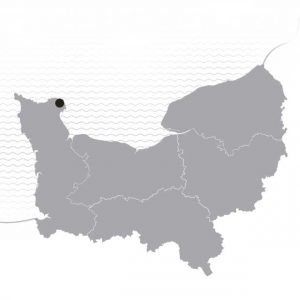 Overlooking the English Channel on the northeastern corner of the Cotentin peninsula, this picturesque port has strong historic links with England. The delicious moules de Barfleur are wild mussels harvested just out to sea.

With its sturdy granite houses and tempting restaurants around the harbour, Barfleur paints a glorious picture of a traditional Norman fishing port. It also played a role in Anglo-French history, from 1066 through to colonial wars.

The squat church looks typically Norman, with its square tower, rather than a spire. The chapel inside boasts a surprising octagonal dome. On the quays, watch fishermen unload their catch and get a good feel for how closely the local community is connected to the sea. Venture down the small alley next to the church and enjoy panoramic views out over the mussel beds to the imposing Gatteville lighthouse, the second-highest in France.

In case you were wondering where was best to sample traditional moule-frites in Normandy, Barfleur is probably the best answer! The vast majority of mussels on sale these days come from mussel farms. However, there are still natural mussel banks in the waters off the eastern side of the Cotentin Peninsula, providing the local moules de Barfleur. These mussels are harvested by boat. A particular variety known as Barfleur blondes have been recognised for their high quality for some years now. There’s no better place to taste them than in one of the harbour-side restaurants. Cooked à la marinière (in a classic shallot and white wine sauce), in a cream sauce, or à la normande (with fish stock, cream, butter and egg yolks), they’re the perfect summer dish. Do check with local restaurants though as to the exact season for these mussels, as they are not available all year round.

By clicking on this link you will be redirected to the www.normandy-secrets.com website
Do you wish to continue?