Nature has carved unusual shapes out of the white cliffs in Etretat, and as a result, this picturesque spot attracted many Impressionist painters, who sought to capture the cliffs on canvas. The pretty seaside town of Etretat is also the setting for Maurice Leblanc’s popular French children’s book about Arsène Lupin, the gentleman burglar. Two further reasons to visit Etretat are its fantastic 18-hole golf course on one cliff, and landscape gardens on the other, both of which afford stunning views of the cliffs and town.

Cliffs and rock formations: Visit Etretat and you’ll soon become familiar with the names given to the extraordinary rock formations carved out of chalk and flint on either side of the town, such as the Aval cliff and arch, Amont cliff, Courtine, Manneporte, Roc Vaudieu and Aiguille de Belval. Some think the Aval cliff and arch resemble the head of an elephant dipping its trunk into the waves. Others reckon, like the great Norman author Guy de Maupassant, that a ship with all its sails unfurled could pass through the colossal Manneporte arch.

Trou à l’homme: One day in 1792, a Swedish ship was thrown against the cliffs here by a raging sea, and was wrecked before the inhabitants of Etretat’s eyes. The next day, the wind dropped and the waves withdrew, revealing a cave running through the cliff with the body of a man lying inside it. As he was being carried off to be buried alongside his unfortunate comrades, he woke up and was saved. The hidden cave in which he was found has now been opened, although it is only accessible at low tide, when it provides access to Jambourg Beach. Check the times of the tides before you set out.

Old covered market: The market square in Etretat is dominated by a fine timber-frame covered market full of charming shops. Plaques on the building recall British and American wartime links to the town, in particular, one that describes a British hospital set up in Etretat during World War I and remembers the 550 British soldiers who died there.

Clos Arsène Lupin: Even if you’re not familiar with the amusing, much-loved gentleman burglar Arsène Lupin and his accomplice Grognard, created by French author Maurice Leblanc, it’s great fun finding out all about them at Le Clos Lupin, a fine 19th century villa once owned by Leblanc, and taking part in your own detective mystery.

Nungesser et Coli Monument: This needle-like monument behind the Church of Notre-Dame de la Garde in 1963 recalls two French aviation heroes from World War I who in 1927 attempted the first flight across the Atlantic. Nungesser and Coli’s plane, Oiseau Blanc, was last seen flying over the cliffs here in Etretat.

Etretat Golf Course: This golf course gets full marks for its incredible location on the cliffs to the west of the town, and makes for a memorable golfing experience. British fans of Etretat were central in founding this course early in the 20th century; in fact, the first president was Viscount Bernard Forbes, 8th Count of Granard and a Liberal politician. The course was designed in 1908 with the help of Arnaud Massy, an exceptional French golf player who taught golf at Etretat and went down in golfing history as the first non-Brit to win the Open Championship (British Open).

Jardins d’Etretat: This stunning garden, created by landscape architect Alexandre Grivko, sits atop the cliff to the east of Etretat and is a beautiful modern addition to the town. In 1905, Madame Thebault, a famous actress of the early twentieth century and close friend of Claude Monet, built a house and started a small avant-garde garden here. That same garden is now home to incredible stone sculptures and immaculately sculpted shrubs, and looks out over the magnificent Etretat cliffs and sea, making it the perfect pit stop for lovers of both Impressionism and contemporary art.

Playing golf in Étretat is an unforgettable experience!

Places to visit in Etretat 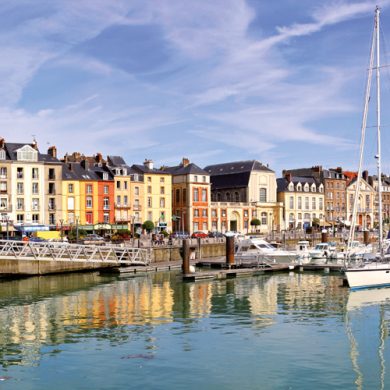