COVID-19 information: latest updates and reopenings.
Home/ All the latest news from Normandy/ Medieval myths and legends in Normandy

The myths and legends of Normandy are rich in mystery and magic. They were peddled by story tellers imbued with the ancient oral traditions found in a heady mix of Celtic imagination, Viking paganism and the Christian faith.

Geese and the castle of Pirou

After a long seige of Pirou castle, the victorious Normans burst into the bailey – to find not a living soul. Only a bedridden old man. They demanded to know where the Lord of the castle and his garrison of soldiers were hiding. This wizened creature peered over his beard and declared that through his book of spells he had whisked them away in the form of a flock of wild geese. The assailants turned their fury on the place and burnt the castle to the ground, with the magic book (and no doubt, its venerable owner.) Stuck in their goosely form for want of the book, the Lord and his men were condemned to their fate, an eternal round of flying, returning each season to the castle in the hope of finding a formula to return to human form, only to fly off in the fall, disappointed…

Finding his horse knackered beyond repair, Hugues, Lord of Tessé castle, dumped it in the forest of Andaine, with absolutely no regard for the environment. But when he returned to the same spot some days later he was amazed to find it transformed into a fetlock-fit beast worthy of a knight. He mounted it and set off to Bagnoles and its invigorating waters. There he was rejuvenated in his turn, and his youthful vigour landed upon La Dame de Bonvouloir who bore him many children as a result. In her honour he erected a tower built in a shape which left little to the imagination!

Etretat and its « Chamber of Damsels »

Once upon a time…there lived three beautiful young sisters. The lord of Fréfossé abducted them and threw the young maidens into a cave set in the cliff. As they would not yield their virtue, he had them walled up there. For three days and nights the local fishermen could hear their plaintiff cries until they gradually faded away. An old woman who was praying on the pebble foreshore saw three angels fly off above her. So the story goes.

The Norman retreat of King Arthur

The Fosse Arthour on the River Sonce, is said to be the place where King Arthur and his Queen Guinevere finally met their end. The passage across the river was guarded by a Genie. The king would be allowed to rejoin his wife only after sunset, but one day Arthur came early, and tried to rush across to the other side, only to be catapulted into the ravine beneath. In despair, the Queen threw herself after him, plunging to her death. It is said their remains still lie in inaccessible caves known as the King’s Chamber and the Queen’s Chamber.      La Fosse Arthour Saint Georges de Rouelley 61700 Domfront-en-Poiraie
ornetourisme.com

The Middle Ages with a modern twist: Five ideas for outings

Fun for all the family in feudal Normandy 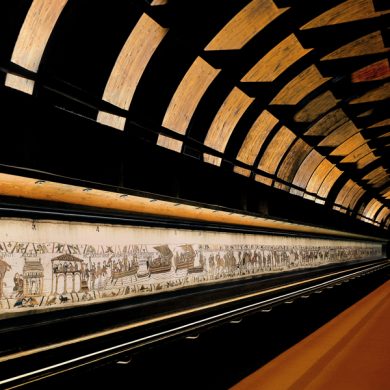