Taking place every other year, the “Transat Jacques Vabre Normandie-Le Havre” is a major event on the international sailing calendar. Over 60 boats will leave from the famous seaside resort of Le Havre to Fort-de-France Bay, in the West Indies, after 10 days of celebrations taking place through the city of Le Havre, becoming a UNESCO World Heritage Site in 2005.
2023 will celebrate the 30th anniversary of the race!

Created in 1993 by the city of Le Havre and the Jacques Vabre coffee brand, the Transat Jacques Vabre Normandie Le Havre retraces the historic coffee route between the first coffee-trading port in France and the most beautiful coffee-producing lands. In 2020, the Normandy Region joined the team as the third partner helping to put on the race. In 2021, over 60 boats left the Bassin Paul Vatine in the heart of the city and set off to Fort-de-France in Martinique, which hosted the finish of the longest and most demanding double-handed transatlantic race, in what promises to be a sensational spectacle. This was the first time that the overseas island hosted the finish of the race, and it was an honour for Martinique, a mecca for yachting, whose Martinican yawl is a UNESCO World Heritage Site.

A wealth of festivities in Le Havre

More than just another sporting event, this world-renowned yacht race always attracts a great deal of media attention. Set up all along the Bassin Paul Vatine, the Race Village is opened for ten days, creating a festive atmosphere and drawing in the crowds. The village comes alive with sport activities, an eco-awareness programme, and hundreds of free sailing trips offered by local clubs. In the evening, concerts and firework displays entertain spectators. The event is attended by over 500,000 visitors.

Founded in 1517 by the French king François Ier, Le Havre is one of France’s most famous and important ports. Situated at the mouth of the River Seine, the city was almost completely rebuilt after World War II by visionary architect August Perret. His bold plans resulted in the city centre becoming a UNESCO World Heritage Site in 2005. Le Havre boasts a huge marina close to its seafront, and welcomes many other nautical events, such as the Solitaire du Figaro. 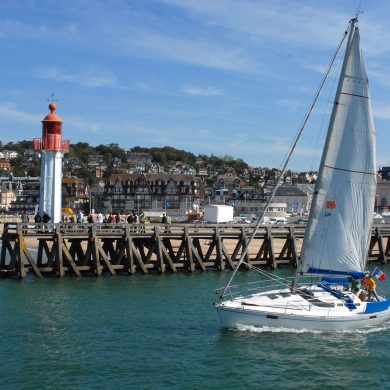 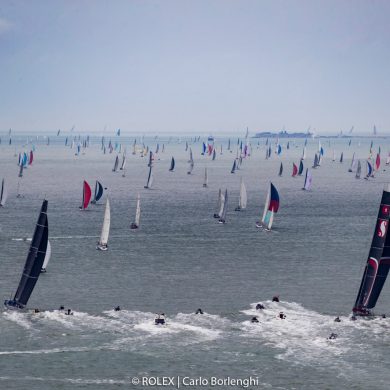 The Rolex Fastnet Race comes back to Cherbourg in July 2023