Every summer, the magnificent cathedral in Rouen comes to life at nightfall with a breathtaking light show projected upon its façade. In keeping with the Normandy Impressionist Festival taking place at the same time, this year’s light show will be called ‘First Impressions’, and is sure to inspire visitors of all ages.

A SPLASH OF COLOUR ON AN ICONIC BUILDING

With time, this entertaining free show has become a loved ritual in the city of a hundred spires. As soon as the summer kicks in, thousands of visitors and locals gather on the cathedral square after sunset to marvel at the ‘Cathedral of Light’. Although there are now many similar light shows taking place across France, Rouen’s was one of the first! As Rouen Cathedral is the tallest in France, the show is all the more magical and grandiose, and seeing its Gothic façade light up in the darkness is both a magical moment and a sight for sore eyes!

Normandy is where Impressionism was born and where it was most prevalent. Today, the region celebrates how the art movement took shape in many of its towns and villages, along the River Seine and on the coast, by hosting the popular five-month Normandy Impressionist Festival every few years.

It is no secret that Rouen Cathedral was a great source of inspiration to the Impressionist master Claude Monet, who painted a series of thirty canvases depicting it from different angles and in different lights, such as in the fog at dawn, at sunrise and in the pinkish tones of sunset. The first half of the light show, ‘First Impression’, recalls all these nuances and atmospheres, and is a tribute to the creativity of Claude Monet and his peers through a series of animated projections that transport viewers from Rouen to Giverny.

PORTRAIT OF A FRENCH HERO

In the second half of the show, another of Normandy’s iconic characters is honoured: Joan of Arc, who met her fate in Rouen. As part of the centenary of her canonisation and the creation of a national bank holiday in her name, visitors can enjoy a light show called ‘Joan(s)’, both darker and more dramatic than ‘First Impression’ but no less entertaining, which explores the many sides to France’s national hero, a symbol of French unity. Discover the epic story of the ‘Maid of Orleans’ and and shed light on the mystery that has surrounded her over the centuries.

This year, the light show has been completely updated with seven additional projectors, ensuring the highest-quality visual experience yet. More reasons than ever to come and enjoy the show!

The French Government and health authorities have announced the cancellation of all non-essential gatherings to control the spread of the Covid-19 virus. Events may be cancelled or postponed. Please check this event’s official website or social media channels before undertaking any travel. 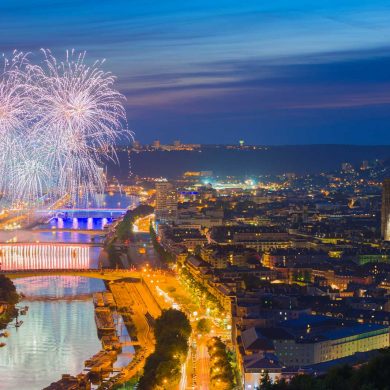 Set sail for the Rouen Armada