Set sail for the Rouen Armada, one of the largest gatherings of tall ships in the world. This popular maritime festival will next take place from 8 to 18 June 2023 and as ever will attract several million visitors to the quaysides of Rouen to see some of the most prestigious sailing ships and their crews.

A showcase of ships

The Rouen Armada is the only event of its kind in France, where over 50 sailing ships, including modern military vessels, converge on Rouen. Regular visitors include legendary ship Le Belem – the last French three-masted square-rigger afloat, L’Hermione – a reconstructed 18th century frigate, the Cisne Branco – a Brazilian ship, the Krusenstern – the second largest sailing ship in the world, and the aptly-named Tenacious – a three-master constructed by the British to be crewed by people with a physical disability (the blind, visually impaired and those confined to a wheelchair).

In 2019, around 4 million spectators were welcomed to Rouen over the 10-day period, and thousands of sailors from across the world walked the streets of Rouen. They say that touching the red pom-pom on a French sailor’s cap brings good luck, so visitors to Rouen were in for a treat!

In past events many international stars have performed at the Armada, such as Iggy Pop, Mika and Madness. The 75th anniversary of the D-Day Landings in Normandy in 2019 meant that the Rouen Armada (which took place at the same time) brought in more visitors than ever before. There was also a huge 1940s ball on the first evening, many different shows, free tours of the ships, and fireworks in the evening. A particular highlight was the sailors parade, where if you manage to touch the red pompom on the sailors’ hats, you get good luck! Each Armada is a measure of the previous one, so we can expect great things for the next festival!

Grand Parade along the River Seine

The Grand Parade is one of the most exciting experiences of the Rouen Armada. As a way of ‘shutting up shop’, these fine ships head downstream towards the Seine estuary between Honfleur and Le Havre. On 18 June from 10am onwards, visitors are invited to come salute the sailors for the last time. One good spot to see them leave is from the Pont Flaubert in Rouen. Other spectacular viewpoints include the villages of La Bouille, Sahurs, Duclair and Jumièges. Alternatively, watch upstream from the Normandy Bridge at Berville-sur-Mer, or in Honfleur where there’s a spot almost at the foot of the Normandy Bridge from which to see them sail under the vaulting bridge deck! There are so many amazing moments, such as when the crew mount the rigging to release the sails or stand along the yardarms – an occasion for much applause and flag-waving! Bring your friends and family, and a picnic! 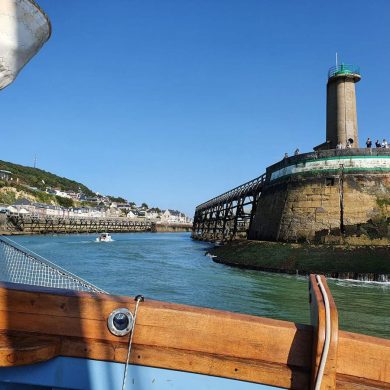 Set sail for the Fécamp Grand’Escale