Rouen boasts the second largest number of listed buildings in France after Paris! Here are just a few of the city’s unmissable sites:

Notre-Dame Cathedral: This exceptional cathedral, the tallest in France, is renowned for its elaborate gothic architecture. Its stunning façade was painted over thirty times by the artist Claude Monet, who depicted its glory in different lights. Inside are artistic and religious relics, including the heart of Richard the Lionheart, buried in a tomb here. Miraculously the cathedral has survived the Wars of Religion, the French Revolution and more recently the Second World War, and is a must-see when in Rouen.

Gros-Horloge: This large clock tower straddling Rouen’s main shopping street is one of the most photographed landmarks in Rouen, and is open to the public. Journey back to the Renaissance period, enjoy panoramic views of Rouen’s medieval centre from the top of the tower, then sip a coffee on a terrace nearby looking up at the beautiful astronomical clock.

Eglise Sainte Jeanne d’Arc: Completed in 1979, this striking modern church rises over the Place du Vieux Marché, where Joan of Arc was burnt at the stake. Although the architecture is bold and contemporary, it also features beautiful stained glass windows from the 16th century, salvaged from other Rouen churches.

Tour Jeanne d’Arc: This imposing tower is all that remains of the mighty castle French king Philippe Auguste had built in Rouen after he had booted Plantagenet King John of England out of France at the start of the 13th century. When English forces were back in control of Normandy in the second half of the Hundred Years’ War, Joan of Arc was held in this fortress and threatened with torture. The tower is now home to an exciting escape game experience.

Historial Jeanne d’Arc (opened 2015): This state-of-the-art museum is dedicated to Joan of Arc, and takes visitors on an interactive journey through her triumphs, trials and tragic martyrdom. The setting is appropriate given the Salle de l’Officialité in the museum was where Joan was tried and condemned to death in 1431. This same chamber witnessed the Maid of Orléans’ posthumous rehabilitation trial in 1456, held once the French were back in control of Normandy.

Eglise Saint-Maclou: This gem of flamboyant gothic architecture can be found just behind the cathedral in one of the most beautiful historic quarters of Rouen, characterised by magnificent half-timbered houses.

Aître Saint-Maclou: A parish cemetery was created here during the Black Plague in 1348, but later, buildings went up around it to serve as ossuaries for the large number of bones from the cemetery. Half-timbering is carved with skulls and cross-bones and grave-diggers’ implements, clearly indicating the former purpose of these buildings. It now houses a new centre dedicated to local arts and crafts.

Palais de Justice: This ornate gothic building, the former parliament of Normandy, is arguably one of the finest examples of medieval civic architecture in France.

Maison Sublime: Excavations at the Palais de Justice in the 1970s revealed the medieval remnants of the oldest Jewish building known in France, and the only example of a medieval rabbinic school remaining in Europe. The name derives from an inscription found declaring ‘Let this abode be sublime.’

Fine Arts Museum: This major fine arts museum is one of the finest in France. Particular highlights include works by the Impressionists Monet, Renoir, Sisley and Degas, ground-breaking French artists Poussin, David, Delacroix, Géricault and Corot, and artists from further afield: Veronese, Velasquez, Caravaggio and Rubens.

Musée de la Céramique: This museum explores Rouen’s rich history over the centuries as producer of some of the finest ceramics in France, exhibiting traditional plates and bowls, pottery shoes and even a ceramic violin. Places to visit in Rouen 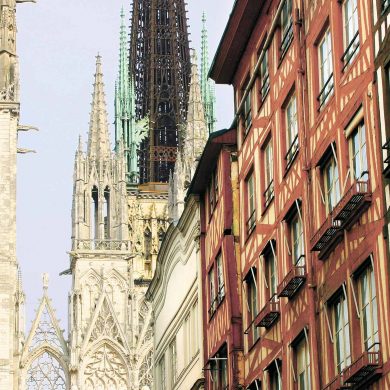 Rouen and the River Seine