The British 50th Northumbrian Division, commanded by Major-General Graham, landed on Gold Beach on D-Day. By the evening, they were on the outskirts of Bayeux, and liberated the town the next day.

The 50th Northumbrian Division landed on Gold Beach and liaised with the Canadians on their left by the evening of D-Day, by which time they were also on the outskirts of Bayeux, liberating the town the next day. Arromanches-les-Bains itself was liberated from inland in order to preserve it for the Royal Engineers, who began the first clearances in anticipation of the arrival in towed pieces of a huge ‘artificial’ or prefabricated port known as a ‘Mulberry.’ Casualties had been minimal in a process involving over 25,000 men!

THE MULBERRIES: ARROMANCHES-les-Bains AND VIERVILLE-sur-Mer

The idea behind the Mulberries was to create two tide-free sheltered harbours for the delivery of war material. This would obviate the need to capture a pre-existing harbour – like Dieppe – from the sea. All the elements would be prefabricated in the UK and towed across the English Channel after D-Day. Come 31 October, by which time Cherbourg and Le Havre had been rebuilt for use by shipping – over 600,000 tons of stores, a third of the British total, 220,000 troops, a quarter of all British personnel, and 40,000 vehicles, nearly a fifth of the total, had been unloaded at Arromanches. For the United States, it was a different story…

Things to see and do in the british Gold Sector 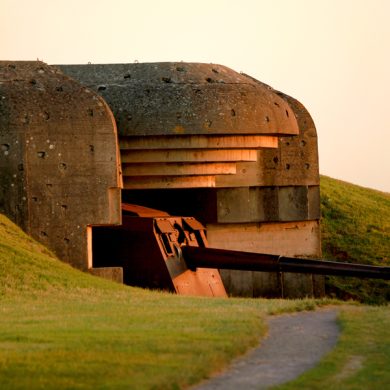