COVID-19 information: latest updates and reopenings.
Home/ All the latest news from Normandy/ Opening of the British Normandy Memorial

D-Day and the Battle of Normandy in 1944 opened the way to the liberation of Europe and the end of World War II. British armed forces played a central role in these momentous events, and more than 22,000 made the ultimate sacrifice for freedom. Until now, there has been no single memorial dedicated to their remembrance. The Normandy Memorial Trust was created in 2016 to realise the dream of Normandy Veterans to have a British Normandy Memorial and, following nearly six years of hard work, opened on Sunday 6 June 2021.

The British Normandy Memorial stands just outside the village of Ver-sur-Mer overlooking Gold Beach, one of the two beaches where British forces landed on 6 June 1944 (D-Day). It records the names of all those under British command who lost their lives in Normandy between 6 June and 31 August 1944. On the columns of the memorial are the names of more than 22,000 men and women. The majority of these names are those of the British soldiers, sailors, marines and airmen who lost their lives on D-Day and in the weeks that followed.

There are also be the names of men and women from other nations around the world who fought under British command or who were attached to the British armed forces, such as Ireland, France, the Netherlands, Poland, Australia, New Zealand, South Africa and the USA. Losses of the British Merchant Navy are also remembered, as are civilian losses, particularly those in France.

The British Normandy Memorial provides a place for remembrance and reflection, where future generations can come to understand the scale of what happened in Normandy in 1944, and the UK’s role in securing Europe’s freedom.

The British Normandy Memorial was designed by British architect Liam O’Connor, the man behind the Bomber Command Memorial in London’s Green Park and the Armed Forces Memorial at the National Memorial Arboretum in Staffordshire, UK.

British sculptor David Williams-Ellis was commissioned by the Normandy Memorial Trust to create the ‘D-Day Sculpture’, a set of bronze figures which occupies a prominent position in the memorial against the backdrop of Gold Beach.

It is a huge honour to be asked to commemorate the D-Day Landings. I will use my four decades of experience to create a memorial that will
enable those who visit the site to reflect upon and contemplate the bravery and sacrifices made by those in June 1944″ – David Williams-Ellis

Below is the latest report from Founding Trustee, Nicholas Witchell, on the final stages of construction of the British Normandy Memorial and the official opening on 6 June 2021. 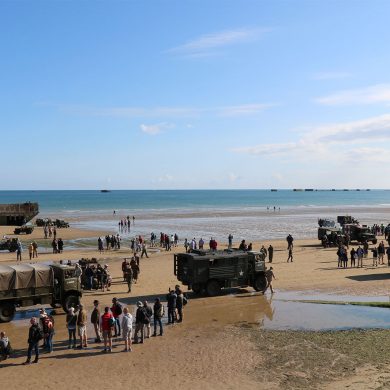 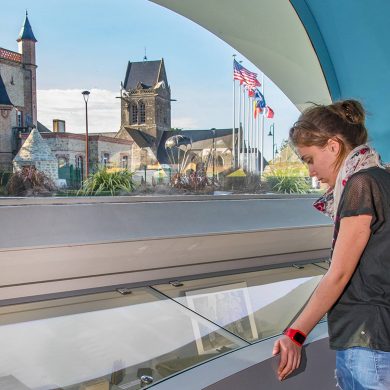 the D-Day Landing Beaches with children

D-Day and the Battle of Normandy sites near Bayeux