COVID-19 information: latest updates and reopenings.
Home/ All the latest news from Normandy/ the D-Day Landing Beaches with children

While the D-Day Landings and the Battle of Normandy may feature in many school books, nothing can quite match actually visiting the places where history was played out. Many museums and remembrance sites on and around the D-Day Landing Beaches are committed to sharing this period of history in a way that’s suitable for younger visitors.

Ride a Jeep on the D-Day Landing Beaches

In the Manche département, you can set off on a guided tour in a Willy’s jeep of the time with Jean Ferolliet, a colourful personality who adapts his commentary to his public. He’s reconstructed a 1940s bar and his own German gun battery. There’s even a night-time “play” reconstituting the actions of the paratroops. ‘We are plunged into the night of the Landings, down narrow country lanes, with the paratroops of the 101st Airborne’, according to one spectator. Note for parents: the period jeep is open and not fitted with seat belts, so take care.

The D-Day Experience  opened its doors in 2015 as part of the Centre Historique des Parachutistes du Jour-J. After a hologram briefing in 3D by  Colonel Wolverton, you are made ready to take off in a flight simulator peering through the windows of an imagined C-47 Skytrain or Dakota. You take off from an airfield in England, look down on the English Channel filled with shipping,  plunge into heavy ack-ack fire over the Normandy countryside, then comes the smell of hot oil and smoke, the throbbing engines – you’re hit, and end up crashing into the ground….7 minutes of guaranteed emotion!  Seeing is believing…..Note for parents : unsuitable for those of nervous disposition. A verbal warning is given at the outset. A great 3D film in its own huge state-of-the-cinema is, on the other hand, great for kids.

The Airborne Museum is located just opposite the famous church where Paratrooper John Steele got stuck on the tower. This museum also proposes an immersive experience, but of a slightly different kind. You walk the fuselage of a C-47 in the conditions of night-time flying; lined along it are mannequins of seated paratroops. You can look over the shoulders of the pilot and navigator at their controls in the cockpit, and the jump-master is standing in the door ready to give the signal – red light – to green light -…. to jump. A background vibration mimicking the Pratt-Witney engines adds to the ambiance, which is otherwise static and therefore suitable for young children. 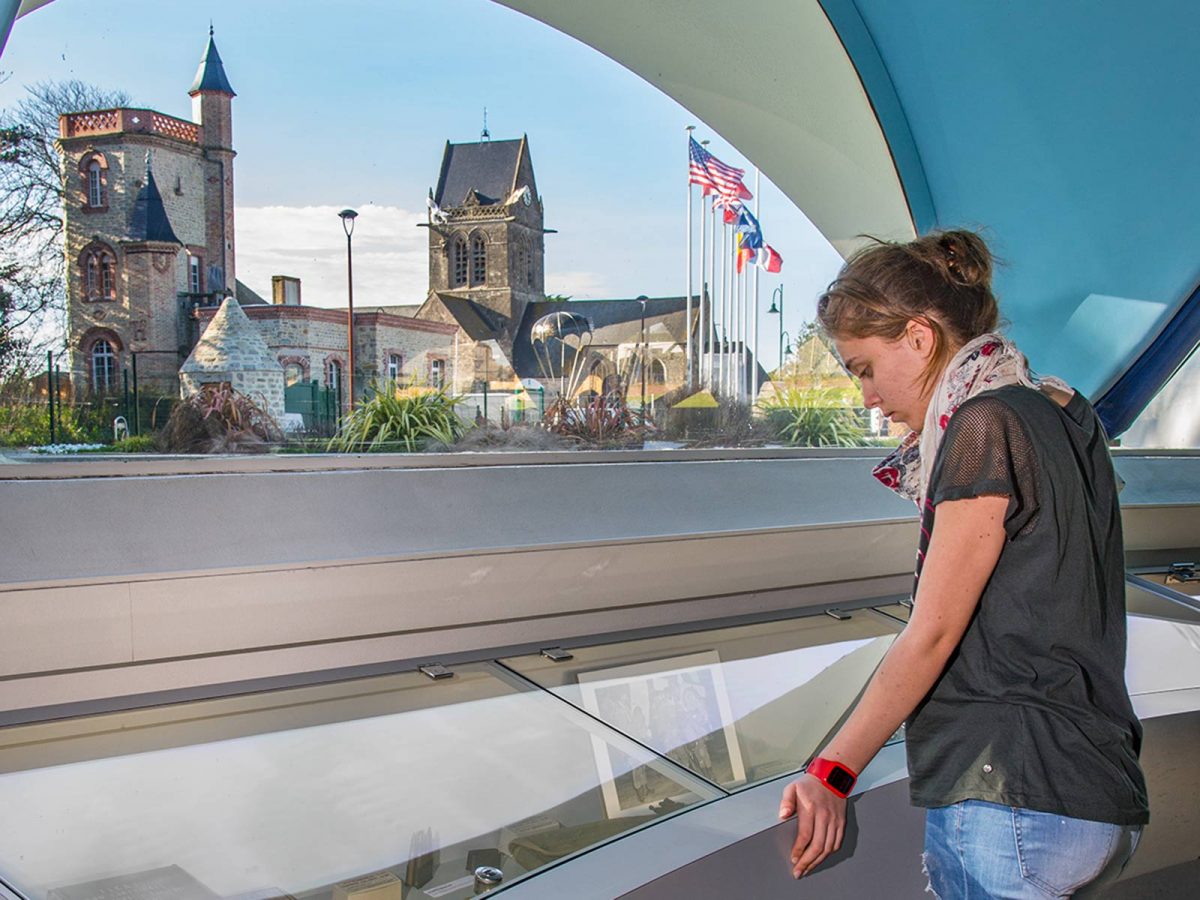 Kayak around the Pointe du Hoc

‘You’d surely have to be crazy to try and take out the Pointe du Hoc from the sea?’ one tourist asked himself – as did the commander, Colonel Rudder in 1954.  At the Pointe du Hoc, you become aware of the violence of battle. Taken by direct clifftop assault in the morning by the Rangers, the mission was to silence one of the German gun batteries along the coast. The landscape still bears the marks of devastating and repeated bombardments from the air, and on D-Day, by sea as well, and is therefore very instructive about the war, and the courage of the men who fought there. The site is however fragile and risky, and may only be visited along the designated, fenced path, making it now safer for children.  An excellent short film at the entrance is great for adults and children alike. The earlier you can get there the better. A radical way to escape the crowds is to take a kayak out of Grandcamp-Maisy. Note for parents: kayaking in the open sea is unsuitable for children without training. 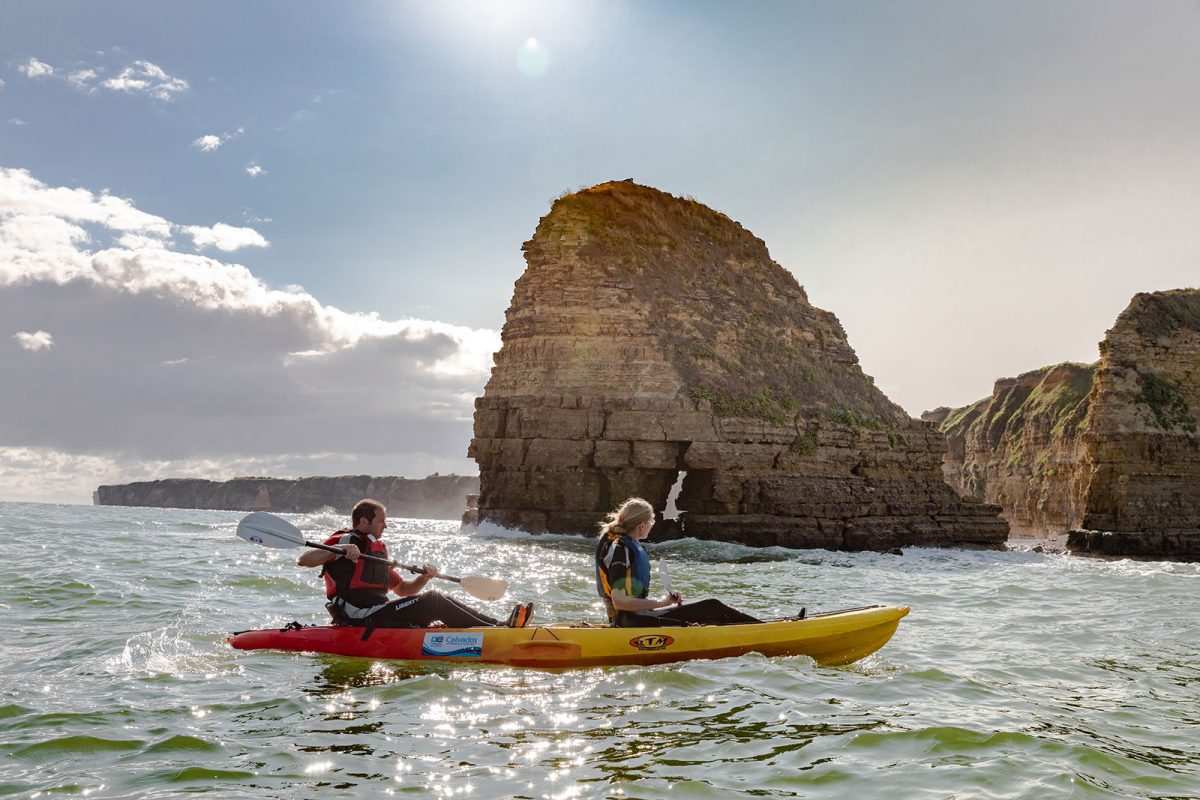 Experience D-Day and the Battle of Normandy in 360°

The Arromanches 360° circular cinema screens archive footage of D-Day and the Battle of Normandy across a series of nine screens in wrap-around format. The archive film was produced by the authors of Apocalypse. Eighty days of fighting in Normandy followed from the first landings to the Liberation of Paris. Bloody scenes and loud noises, including the wail of sirens and bombs falling, make this film unsuitable for younger children. 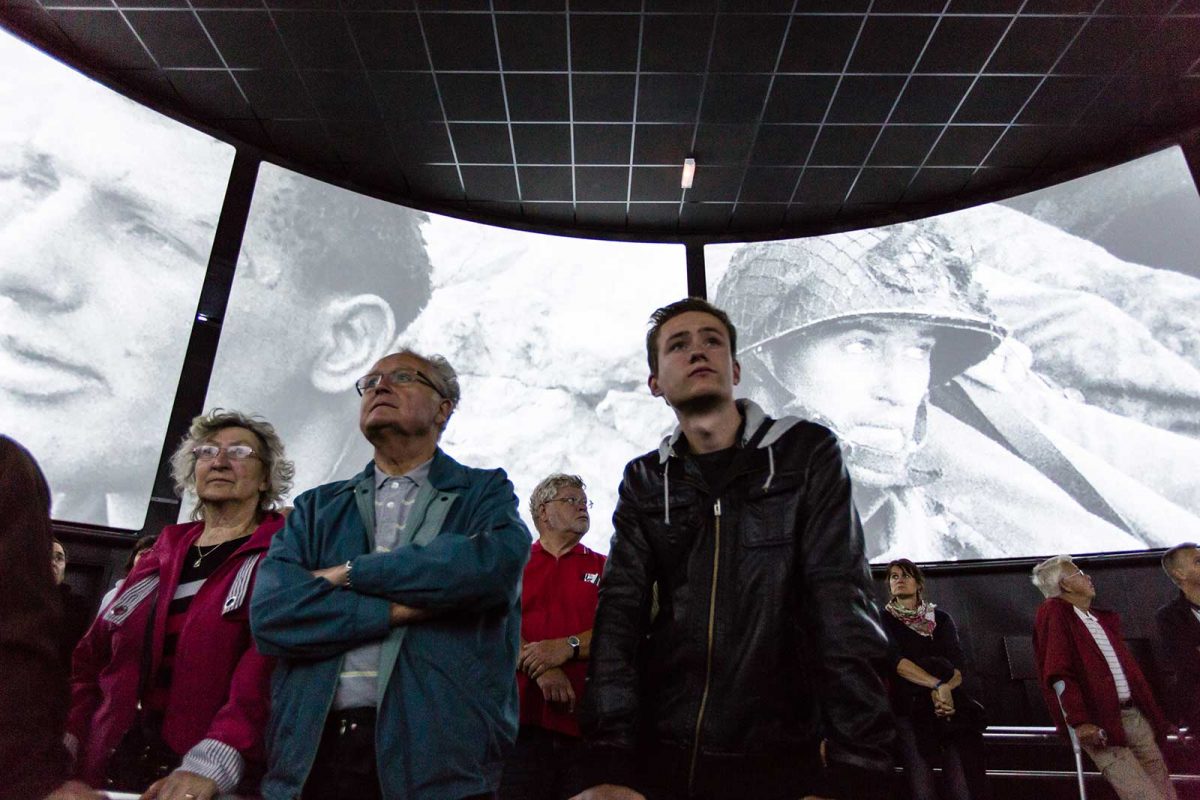