Home / About Normandy / Some Normandy landmarks / Where is Normandy?

Situated in north-west France, in Europe, close to the French capital Paris, Normandy is famous for its medieval and 20th-century history, Impressionist art, regional cuisine, beautiful landscapes and picturesque towns.

Normandy is a region in north-west France

With 350 miles of coastline and beaches, and richly varied landscapes, Normandy gives you a wonderful choice of scenery and culture: the stunning beauty of the cliffs of Etretat, the historic coastline stretching from Caen to Sainte-Mère-Eglise via Arromanches-les-Bains, the River Seine winding between wooded hills and chalk escarpments, the craggy hills of the Suisse Normande, the metropolitan excitement of Rouen and the fields and hedges of Calvados, punctuated with orchards and half-timber houses.

Mont-Saint-Michel and its Bay is definitely located in Normandy and count among France’s most stunning sights.

Enjoy Normandy’s unique blend of maritime traditions and rural way of life. Marvel at its historic towns and buildings, stroll down quiet country lanes, enjoy local dishes in picturesque villages, or sip a drink by the quayside of one of its old ports while fishermen repair their nets and seagulls soar overhead.

Normandy is easily accessible from the UK thanks to its four cross-Channel ports (Dieppe, Le Havre, Caen-Ouistreham and Cherbourg). If you are flying to France from abroad, Caen-Carpiquet and Deauville airports run regular flights. Paris-Charles de Gaulle Airport is only an hours’ drive away from Normandy’s easternmost border. 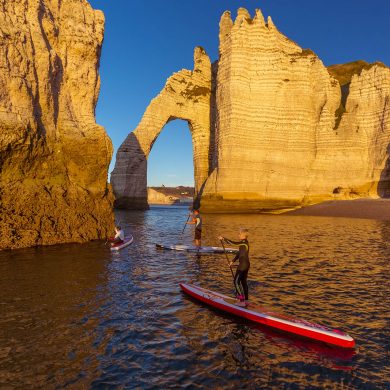 Day trips to Normandy from Paris 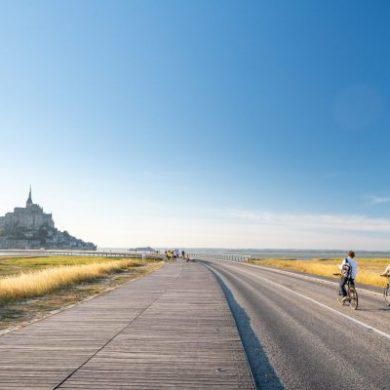 The most beautiful beaches in Normandy

Discover the five départements that make up Normandy