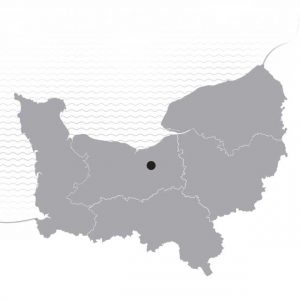 An archetypal Norman village, its half-timbered houses lovingly restored, Beuvron-en-Auge lies inland from the resort of Cabourg on the Côte Fleurie (Flowered Coast), but this place is redolent of traditional rustic Normandy, with its concentration of local producers and antiques dealers.

The Pays d’Auge area is dotted with historic dwellings. Within it, beautiful Beuvron-en-Auge is particularly packed with gems. Admire the 16th-century Vieux Manoir, the 17th- and 18th-century elaborate half-timbered houses and the 18th-century Auberge de la Boule d’Or, a classic former inn. Round and about the village and the area, seek out craft workshops and places selling local produce, which you can often taste on the spot. Such tours prove priceless.

A gem FOR EPICURIANS AND ANTIQUES LOVERS

The Cider Route is a well-signposted tourist route, some 40km in length, focusing on cider-making traditions in these parts and passing via Beuvron-en-Auge. Some 20 producers located along the way open their doors to visitors. Following the route, you can take in many delightful, typical images of Normandy, from châteaux, manors and half-timbered buildings to fine studs. Every year, come autumn, the Beuvron-en-Auge cider festival offers visitors an opportunity to watch the great apple-pressing take place on the village square and to taste a whole variety of different ciders.

Antiques lovers will very much appreciate Beuvron-en-Auge, wandering around the specialist boutiques located across the centre. Every second Sunday in the month, the Beuvr’Antiques draw an enthusiastic crowd.

No wonder world-famous artist David Hockney has chosen to live and work in Beuvron-en-Auge!

Normandy’s other ‘most beautiful villages in France’