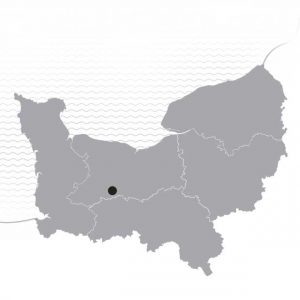 In the Suisse Normande (‘Norman Switzerland’ in English) you’re bound to feel closer to nature. Whether you’re into canoeing, kayaking, hiking or rock-climbing, this wild, hilly stretch of the Orne valley to the south of Caen is fantastic for all manner of outdoor activities, with dramatic panoramic views that you will fall in love with.

Wooded landscapes shaped by the river

The Orne river has carved dramatic meanders and gorges into the rocks of the area known as the Suisse Normande. The highest hills in these parts reach over 1,000 feet, making these the most elevated spots in Normandy.

A paradise for OUTDOOR PURSUITS

Sports enthusiasts will find plenty of active sports to try out in the Suisse Normande, with the Orne river attracting canoeists, both amateur and professional. The area even hosted the canoe polo world championships in 2014. Angling is another popular, albeit quieter pursuit on the water, and the cliffs and hills overhead attract rock-climbers and hikers.

There are endless places to cycle, go horse-riding and walk in the Suisse Normande, from relaxing strolls to full-on hikes. This area is also renowned for picturesque rock climbing locations such as the Rochers des Parcs in Clécy.

The Suisse Normande also has its relaxing side, with cosy riverside hotels and restaurants and picturesque villages perching on the slopes.

Clécy: The lovely slope-side village of Clécy is dominated by a dramatic outcrop known as the Pain de Sucre (Sugarloaf), as well as by the Lande Viaduct. The Church of Saint-Pierre, with origins going back to the 15th century, was given imposing transepts and choir in the 19th century. The village features interesting houses and manors that reflect Clécy’s importance in the region. Down by the Orne, in the adjoining village of Le Vey, the river and riverside restaurants are extremely popular. For sporting types there’s also the golf course and the summer toboggan track.

Thury-Harcourt – Le Hom: Northern gateway to the Suisse Normande, Thury-Harcourt had a major castle and a significant industrial past, with tanneries and enamelling factories. However, the village was destroyed by German forces in 1944, so it had to be entirely rebuilt after the war. The ruined castle is surrounded by enchanting gardens beside the Orne River.

Roche d’Oëtre: The great Oëtre Rock rising above the Rouvre River, south of the village of Pont-d’Ouilly, boasts one of the finest viewpoints in Normandy. To appreciate this wild place, where the shapes of the rocks spark the imagination, follow the two-hour hiking circuit.

Château de la Motte: This magnificent listed building was constructed between 1598 and 1614, and is a good example of early French classical architecture. The castle’s gardens are well worth seeing, as is the fine Romanesque church in nearby Acqueville

Saint-Rémy-sur-Orne: Here, the earth was rich in iron ore, which was extracted from pits known as Les Fosses d’Enfer (or Pits of Hell) from 1460 until 1968. Now the Musée des Fosses d’Enfer and Normandy Geological Resource Centre relate Normandy’s geological story as well as charting the lives of the local miners. Notre-Dame Chapel, with its altar placed on a mining truck, was built by miners in the 20th century.

Saint-Omer: As well as its Romanesque church, refurbished between the 18th and 19th centuries, Saint-Omer is known for the remains of the Abbaye du Val, a former Augustinian establishment. As to the site of Saint-Clair’s Chapel, it offers fine views over the plains of Falaise and Caen towards the sea, the Seine estuary and the hills of the Pays d’Auge.

Tranchée du Hom:  The rocks were cut through here in 1883 to allow a road to be built between Thury-Harcourt and Aunay-sur-Odon.

Rochers des Parcs: These dramatic cliffs opposite Clécy lay bare the geology of the area. They are popular with hikers and are surrounded by fine moorland. Rock-climbers love them too, enjoying numerous routes up the rock-faces. 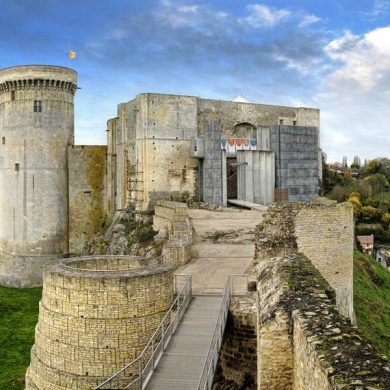 Plan your trip to the Suisse Normande

Campsites and caravanning parks in the Suisse Normande

Sports and leisure activities in the Suisse Normande