From whatever side you approach the town the full square stone keep on its rocky outcrop (the name comes from the Old German word falisa meaning ‘rock’) dominates the market town to this day. Always associated with William the Conqueror as his birthplace, the present stone castle is, as in Caen; mostly the work of his youngest son, Henry I.

BIRTHPLACE OF WILLIAM THE CONQUEROR

The Dukes of Normandy chose such places to both control the local population and protect them – hence the size of the bailey. Conquest in a sense began at home, but the Normans would be forever renowned for their castle-building. The 6th Duke Robert had probably poisoned his older brother Duke Richard over the inheritance of the Duchy – we shall never know – only for himself to die, also possibly poisoned – we shall never know – on his return from the Holy Land. Charming people. This left William, a vulnerable bastard child, the seventh Duke, aged just eight.

In the Danish manner

William had come into this world as the result of a coup de coeur between Robert and Arlette (or Herleva), a tanner’s daughter caught washing skins in a stream at the foot of the castle walls. Love at first smell it seems. Although they never married, Robert seemed to have trusted her and had her married off to the Count of Conteville for safe keeping. So William would have two half-brothers; Odo (he of the Bayeux Tapestry) and, yes, another Robert; later companions in 1066 And All That. That the little bastard William should have been designated heir before Robert’s departure to the Holy Land in 1034 was not unusual at the time; it was called the more danico, ‘in the Danish manner.’ Turbulent times would continue; the family castle found itself more than once the preferred safe haven for William and at the heart of a history that would lead to the transformation of itself – and of England…

The Fate of Falaise

The scale of the site, the imposing keep, the curtain walls and round towers, all perched on a spur of rock remind us of the strategic importance it once had, an importance that would return with the Battle of Falaise in 1204 – and in 1944, for which on both occasions the town would suffer mightily. Falaise was designated by the Allies as a town of sufficient importance to merit being obliterated. It straddled the road to Caen, a D-Day objective. The Germans must not be allowed to pass. The churches and much of the town were rebuilt reusing the local stone. The castle, however, was too well made to be anything other than a little dented.

Today it is possible to visit both the castle and the Memorial to Civilian Suffering museum by the gateway – a reminder of the scale of destruction in 1944 and the effects on the local population caught up in it. 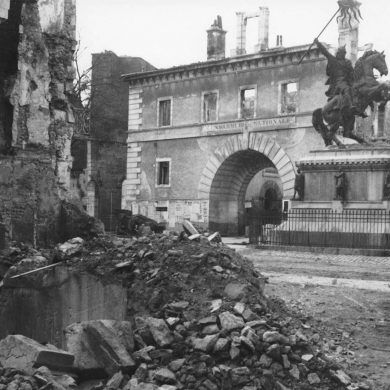 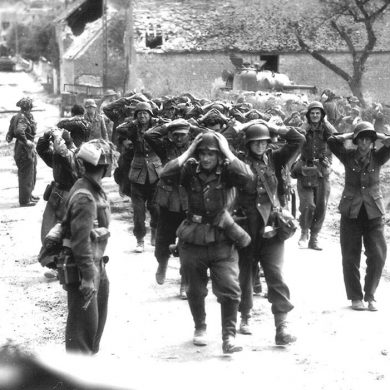 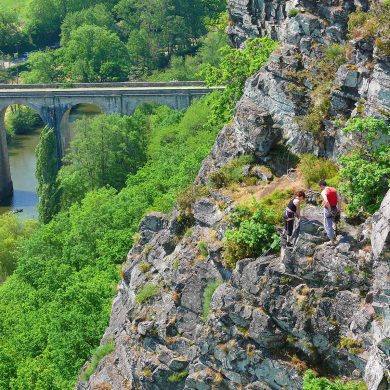