COVID-19 information: latest updates and reopenings.
Home / Plan your trip to Normandy / What’s on / Major events / 77th anniversary of D-Day and the Battle of Normandy

2021 marks the 77th anniversary of D-Day and the Battle of Normandy. Based on this year’s commemorations paying tribute to the heroes who came from far and wide to restore freedom to Europe, here’s an idea of what to expect.

Opening of the British Normandy Memorial

British armed forces played a central role in D-Day and the Battle of Normandy, and more than 22,000 made the ultimate sacrifice for freedom. Until now, there has been no single memorial dedicated to their remembrance. The Normandy Memorial Trust was created in 2016 to realise the dream of Normandy Veterans to have a British Normandy Memorial and, following nearly six years of hard work, it finally opens on Sunday 6 June 2021, to mark the 77th Anniversary of D-Day.

Visit the seaside town of Ouistreham in the Sword Beach sector and rent an umbrella from the local tourist office, fitted with headphones and GPS. Plug in and follow the 2km La Délicate audio tour through Ouistreham and the neighbouring towns of Lion-sur-Mer and Colleville-Montgomery, learning all about this area’s D-Day history and admiring the grand villas along the seafront

The D-Day Landing Beaches with a dog 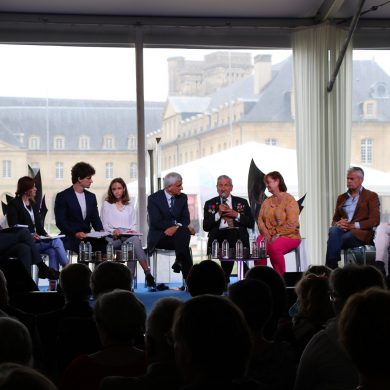