Spanning the mouth of the River Seine estuary, the Pont de Normandie (Normandy Bridge), is one of our most prominent landmarks. Beautifully designed and architecturally impressive, it was the longest cable-stayed bridge in the world when it opened. It remains a must-see, and crossing the bridge is an experience in itself!

Many visitors to Normandy cross this world-famous bridge during their trip to our beautiful part of France, but few know its origin, history and secrets. Back in the 80s, the only bridge crossing the estuary was the Pont de Tancarville, located ten miles away from Le Havre, one of France’s most important port-cities. Due to the exponential growth of motorway traffic, the construction of a new bridge became a necessity. Designed by French structural engineer Michel Virlogeux and by architects François Doyelle and Charles Lavigne, the construction of the bridge began in 1988 and lasted 7 years. The bridge was inaugurated on 20 January 1995 and set a world record at the time of completion. When it opened to the public, it was indeed both the longest cable-stayed bridge in the world, and also had a record distance between piers for a cable-stayed bridge. It was more than 250 metres (820 ft) longer between piers than the previous record. The Pont de Normandie remains the bridge with the longest span in France.

Linking Seine-Maritime to Calvados, and Le Havre to Honfleur, the bridge is 215 metres high and 2141 metres long. Built in concrete and metal, the impressive structure has four motorised traffic lanes, two pedestrian lanes and two cycle lanes. Thanks to its hight, it doesn’t obstruct the navigation of boats sailing up and down the River Seine. The bridge’s two gigantic pylons, shaped like upside-down Ys, resemble two giants rooted in the ground, on each side of the river. The long cables look like fine strings in the distance, and the thin deck is curved like the sail of a ship. It has also been designed like a plane in order to resist winds of over 300 km/h (that’s 186 mph)!

The Pont de Normandie is a toll bridge for motorised vehicles, but the crossing is well worth the price (5,50 € in 2021). The bridge offers a beautiful panorama of the Seine estuary, Honfleur and Le Havre. You can watch the ships going up or down the Seine, the port activity of Port 2000, the fauna of the estuary nature reserve and, of course, immortalise the lights so dear to our Impressionist painters. The experience is even more unforgettable in high winds! There is a footpath as well as a narrow cycle lane in each direction allowing pedestrians and cyclists to cross the bridge free of charge and enjoy views for longer.

To make the most of views the bridge itself, head to the Mont-Joli Panorama on the heights of Honfleur or stop off at the newly-bulit Honfleur Normandy Outlet, at the entrance of the town. If you venture off the beaten track, you can also drive under the bridge on the banks of the River Seine in La Rivière-Saint-Sauveur. 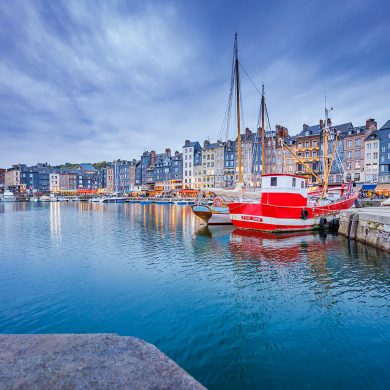