COVID-19 information: latest updates and reopenings.
Home/ All the latest news from Normandy/ Monet, who are you really?

For all his airs of being an amiable old cove, Claude Monet (1840 – 1926) seethed with the spirit of adventure, and even with those arthritic green fingers of his old age, he always wielded a rebellious and bold brush. At a stroke he, along with his band of buddies, overturned the apple cart of art history.

Oscar-Claude Monet started his career by sketching caricatures of local notables and hawking them about in Le Havre: they enjoyed a certain success. He caught the eye of Eugene Boudin who also worked in Le Havre, and he encouraged the young Monet to take his themes from nature, and to get outside and learn the art of painting alongside him. Monet would later say, “it was as if a veil were torn from my eyes.” At the age of 19 he set up in Paris where a new life opened up, Pissarro, Guillaumin, Sisley, Bazille, Renoir would soon be among his companions.

He had a difficult early career. He was rejected by the Official Salons, so he participated in the unofficial Salon of the Rejected in 1874. The art critic Louis Leroy, upon seeing Monet’s painting, “Impression, Sunrise” famously scoffed, “half-printed wallpaper has more finish than this; and since I’m so very ”impressed” there must be an impression in there somewhere!”  Ho ho. Thus, a single picture gave the name to the entire impressionist movement!

Monet on the Move

New paints, new portable easels, the railway and much besides opened Monet to new horizons. In his early career he would set up his own easel in Paris, Fontainebleau, Argenteuil, Vetheuil; in Normandy, Honfleur, Rouen, Dieppe, Etretat, Fécamp; and abroad, to London, Holland, Oslo, and to the Mediterranean coast. He loved Oriental art and collected Japanese prints, some of which can be seen at his house at Giverny, where he settled down for 43 years.

Up to the table all those that are able!

Monet also loved receiving his friends for lunch and dinner; a renowned gourmand, you only have to look at the impressive list of wedding menus in the family! By 1130 you could be sure he’d be at table! Pissarro, Sisley, Rodin, Cézanne, Bonnard, Guitry and Clémenceau counted among his guests and close friends.

A Series worth seeing

Monet threw out the rule book. He was part of a revolutionary artistic movement which sought its inspiration in “open air” painting and turned its back on the hierarchy of approved academic subjects and techniques. Instead, he tackled everyday themes, the separated brushwork of pure colour, and the effect of light and light on shade. He also invented the idea of the series paintings, some of his better known include Haystacks, Poplar trees and the Rouen cathedral series; these sought to capture the effects of light at different times of the day and of the season, but always in an identical format. “The other painters would paint a house, a boat, and then they’re done. But me, I want to paint the air around the bridge, the house, the boat, the beauty of the air around where they are, and it’s nigh on impossible.”

The waterlilies that Monet cultivated in his ponds became something of an obsession and in his struggle to represent them he painted them over 300 times. The last project of his long life was to create 40 vast panels which required him to create a special studio at Giverny to house them. They are displayed in the Orangerie museum in Paris in a specially adapted oval gallery over 100 metres long and 2 metres high, and as you contemplate them and tip into that abstract world behind and beyond the waterlilies, you realise that we have gone one step beyond representative art into the abstract.

In the footsteps of Monet

In order to connect with Monet’s life and art you have to start with Giverny of course, in order to soak up the particular atmosphere of his house, his studio and his gardens. Then it would seem proper to pay homage at his grave in the nearby churchyard.

Then you could pop down to the Southampton quayside of Le Havre where it all began, or if you have the time, follow the changing moods of light on the west front of Rouen cathedral, or the cliffs of Etretat. A host of museums in Paris and Normandy display his masterpieces:  In the Orangery museum, (Waterlilies), the Marmottan-Monet Museum (Impression, sunrise), the Orsay Museum (Rouen cathedral series), the Fine Arts Museum, Rouen (general view of Rouen), Vernon Museum, (the Setting sun at Pourville) and  Le Havre MuMa (the Houses of Parliament, London). 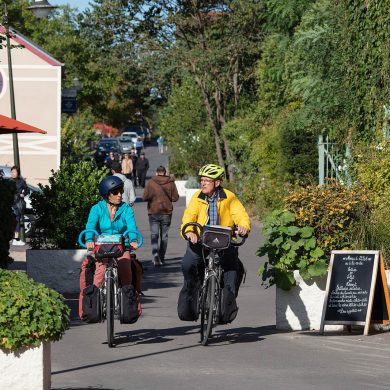