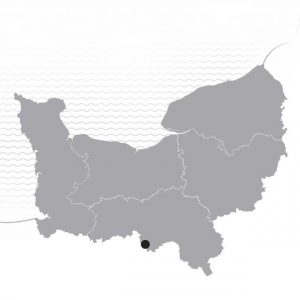 Set in the beautiful hills known as Les Alpes Mancelles, Saint-Céneri-le-Gérei is a picturesque village officially listed among the ‘most beautiful villages in France’ (Les Plus Beaux Villages de France®). This village was much loved by artists such as Corot and Courbet and pre-Impressionist landscape painters for its peace and serenity.

One of the ‘most beautiful villages in France’

Time appears to have stood still at Saint-Céneri-le-Gérei, on Normandy’s now quiet southern border. The most picturesque of medieval chapels looks swamped by the large meadow surrounding it, down close to the Sarthe river, which meanders peacefully by. The 11th-century Romanesque church, perched above the river, contains beautiful frescoes. There’s also the so-called miraculous fountain to discover. At this spot, so the story goes, the thirsty seventh-century Saint-Céneri and his disciple were delighted to see fresh water spring up in front of them. In addition, legend had it that this water had the ability to cure eye problems.

It’s no surprise that this small, lesser-known village, not far from the historic town of Alençon, attracted many painters. Run by the two Moisy sisters in the latter part of the 19th century, the Auberge des Sœurs Moisy was a place where renowned artists liked to come to rest as well as to paint. This inn’s most original feature is its celebrated Salle des Décapités, decorated with an intriguing panoply of black heads drawn in profile. The inn now welcomes visitors as an art museum.