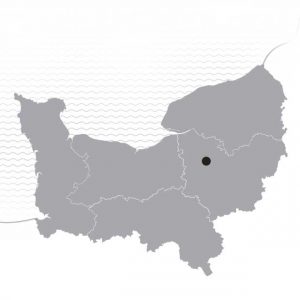 Le Bec-Hellouin is a village with a profound religious past that can still be felt as well as seen. Justifiably, it has also been listed among the ‘most beautiful villages in France’.

origins of the village

The Abbaye Notre-Dame du Bec was founded around 1034 by a man called Hellouin, or Herluin, who had previously served as a knight under the Norman Count of Brionne before converting to the monastic life. The abbey quickly rose to become a major Christian centre thanks to two exceptionally powerful religious men. Lanfranc of Pavia, encouraging a great building programme, and Anselm of Aosta, fostering Christian thought, would make this little corner of Normandy famous, spreading the deep spirituality developed at Le Bec much further afield, notably across the Channel to England. These two abbots, having first served at this spot beside the gentle Risle River, would both in fact go on to serve as Archbishops of Canterbury, no less. Back at Le Bec-Hellouin, the abbey’s monks encouraged the growth of the adjoining village, to have workers based close by.

All here turned towards the abbey, living according to its ups and downs, from moments of great joy to times of despair. During the second half of the Hundred Years War, 1417 proved a particularly dark year; the abbot of the time, fearing a devastating attack by marauding English troops, employed a scorched-earth policy that caused the village’s destruction but did not stop the English enemy taking control of the abbey. At the Revolution, the monastic buildings were turned into a cavalry barracks. Monks only returned in 1948, followed, the next year, by some nuns, who had a separate convent built. Le Bec-Hellouin stands out not just for its religious heritage but also for its lovely setting, its peaceful, well-flowered streets and its half-timbered houses.

An ABBEY, a CHURCH and a MONASTERY

Abbaye Notre-Dame du Bec: This historic monument is the property of the French State, but the abbey is still lived in by Benedictine monks whose production of hand-made pottery contributes to its present-day reputation. The magnificent, soaring Saint-Nicolas Tower dominates the surrounding religious buildings, including the 17th-century cloister with its exceptionally peaceful atmosphere.

Eglise Saint-André: Originally erected in 1039, the village church of Saint-André depended, right up to the Revolution, on the abbey. Then, in 1792, the tomb of the Blessed Hellouin was transferred into this church. Now, though, his tomb has been placed back in the heart of the abbey.

Monastère Sainte-Françoise Romaine: Two kilometres from the abbey, 26 nuns live in this convent, following the rule of Saint-Benedict, in buildings constructed since 1950.