The Château Gaillard, Richard the Lion Heart’s great fortress, the Grey Tower of King Philippe Auguste, the Abbey of Mortemer…these are just a few of our medieval treasures! The Eure has a wealth of churches and castles to catapult us into the medieval past.

Although reduced to a ruin, the Château-Gaillard crowning the rocky crags remains an imposing and majestic sight. It gives a stunning view over the twisting River Seine at Les Andelys.  In just two years (1196-1198) Richard had this “impregnable”castle built overlooking all routes to Rouen. In August 1203, King Philippe Auguste laid siege to the castle to starve its occupants out. However they found an unguarded toilet chute that saved them a lot of trouble and in March 1204 it fell to the French Crown. A bum rush for the occupants.

The XIIth century wooden motte and bailey castle was rebuilt in the XIVth and XVIIth centuries, so that while the western side has retained its feudal aspect, on the eastern side large windows inserted into the walls transformed it into a classic residence for the Harcourt family. The chateau has a remarkable arboretum, said to be one of the oldest in France, and a superb place for a perambulation!

A frontier castle and town, Gisors had a strategic importance at the junction of Normandy, the Ile de France, and Picardy. William II ordered the first wooden motte and bailey castle to be built, and his kid brother who murdered him, Henry II, had the massive octagonal stone keep and curtain wall constructed (while rebuilding 24 other castles in Normandy to feel truly safe in his realm)! During the Hundred Years’ War it changed hands many times, before finally being returned to the French crown in 1449.

The Cistercian Abbey of Mortemer was founded in 1134 by our Henry I, a year before his death. The monks constructed what became one of the largest Cistercian monasteries in the Christian world. It is located in the valley between Forêt de Lyons and Lisors. The abbey fell into decline and only 5 monks were left by 1790! The ruins of the church and its conventual buildings invite contemplation, as do its grounds and lake. Many cultural events are held here each year and the legends and ghost stories that cling to this Gothic pile are recounted each year in the “Night of the Phantom”!

This XIIth century round tower was built on the orders of Philippe Auguste, with walls 4 metres thick in the grison stone of the Pay d’Ouche. There’ a fine view from the top. An exhibition inside focuses on the key Battle of Verneuil, in which over a third of those involved were killed. Described as a second Agincourt (by the English!), an Anglo-Norman force of 14000 men confronted an army of 18000 Franco-Scottish on Thursday August 17th1424. There was great slaughter. Over 1600 English were killed, and over 7000 of those opposing them…

Blanc-Buisson castle is a feudal home going back to the end of the XIIIth century. Only three families have owned it in the 7 centuries of its history, and nearly always through inheritance or marriage. It therefore embodies both civilian and military functions by virtue of its continuous occupation, and is also a fine example of a post-medieval Pays d’Ouche architecture. There’s of course a legend about an escape tunnel under the moat… 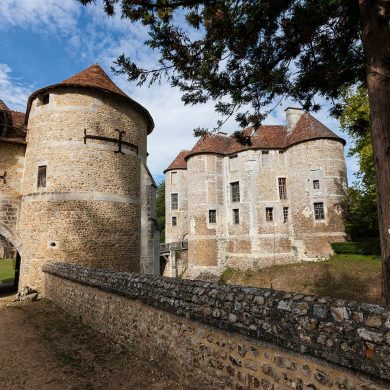 The Middle Ages with a modern twist: Five ideas for outings

The brochure on Medieval Normandy